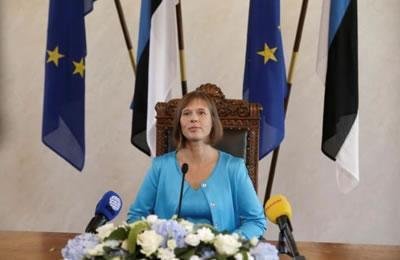 Estonia’s parliament has selected a new president who will be the country’s first female leader.

Kaljulaid, 46, will succeed the current president, Toomas Hendrik Ilves, who is stepping down next week after two five-year terms in the ceremonial post.

The choice of Kaljulaid, who works at the European court of auditors, became possible after the six parliamentary parties agreed to propose a political outsider as a single candidate.

Kersti Kaljulaid was born in Tartu, the second largest town in Estonia, in 1969. She graduated from high school in Tallinn, where she was a member of students’ scientific association, specializing in ornithology. Kaljulaid earned her degree from the University of Tartu in biology and later supplemented her education by obtaining MBA in business management at the same university.

By 1999, Kaljulaid’s reputation as an intelligent, quick-witted and efficient professional, was already so well-known that she was offered the prime minister’s economic advisor position – a post she held for three years.

In 2002, Kaljulaid became the first woman to lead a power plant; her employer later characterized her as a highly effective and well-organized administrator, who by explaining her views and ideas, but at the same time listening to others, successfully implemented a new organizational behavior.

In 2004, after Estonia joined the European Union, Kaljulaid was chosen as the country’s representative in the European Court of Auditors, based in Luxembourg. The primary role of the court is to externally check if the budget of the European Union has been implemented correctly, in that EU funds have been spent legally and with sound management. Kaljulaid remained on that post until she was proposed as the presidential candidate.

Politically, Kaljulaid has defined herself as a liberal conservative – she has spoken in favor of conservative economic policies, but at the same time has liberal views on many social matters, such as LGBT rights and immigration.

Kaljulaid has promised to “talk to people” across Estonia. In the short span of time, she gave numerous interviews where she emphasized the need to pay more attention to domestic policies than her predecessor.

“I want to listen to the people who live in different corners [of Estonia], and are disappointed in political parties and political and public affairs in general,” Kaljulaid said in a public letter last week.

Kaljulaid said that the role of the Estonian president was to “be present wherever things are getting complicated.” “The president will not be able to provide a solution to every issue in Estonia, but to be able to recognize, understand and communicate the problem is already a huge step toward a solution. This can be done and the president needs to do this, responsibly and impartially,” she said.

She also spoke in support of strong civil society – less state interference, more confident and active citizens. But she has placed high importance on helping those in need. “An ethical Estonia will help the vulnerable – the state budget should always support those who are weak, before it begins to spend on those who are strong,” Kaljulaid said.

Kersti Kaljulaid is married and has four children, two from her first, and two from her second marriage. She is also a grandmother.