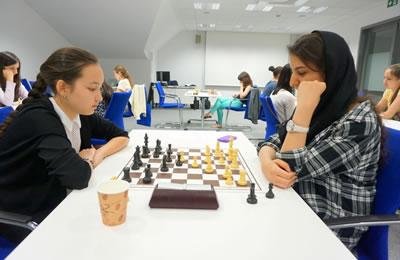 under the rule of the mullahs’ religious dictatorship and urged FIDE to cancel its decision.

In a statement issued on October 3, 2016, the NCRI Women’s Committee underlined Rouhani’s record of suppression of women’s rights and pointed out that the Iranian regime must be reminded of its duty to observe human rights in Iran and particularly the rights of Iranian women as the first step and first condition for any engagement with other countries.

Awarding Women’s World Chess Championship to a regime that takes advantage of gender apartheid to suppress the entire society and has a shameful, bloody record in violation of women’s rights is tantamount to endorsing and accepting the suppression of Iranian women, particularly that in addition to the Iranian chess players, the fundamentalist rulers of Iran force female players from other countries to wear the hijab, as well.

The NCRI Women’s Committee urged all female players to boycott the games in protest to the suppression of Iranian women and imposing the compulsory veil, as some of the world’s top champions of chess have already done so.