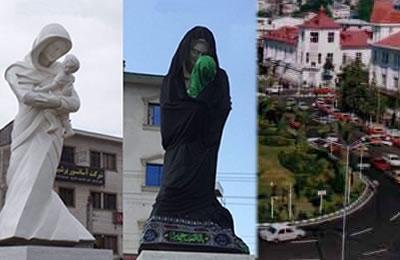 The group was going to play a number of its musical pieces on the international day honoring great Iranian mystic poet, Mowlana better known as Rumi.

The Gozar musical group issued a statement vowing to continue its activities despite obstacles created by the government.

In another curious development concurrent with the mourning Muslim month of Moharram, the statue in the Mother Square of Rasht, capital of the northern Iranian Province of Gilan, was covered with a black veil, provoking vast public resentment.

The measure was a reminder of the covering of statues in a Rome museum during Rouhani’s visit last January.