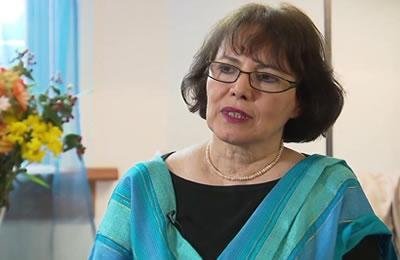 An Iranian-Canadian citizen, Ms. Hoodfar talked to the CBC News on October 5, 2016.

Ms. Hoodfar, 65, said members of Iran’s Revolutionary Guard psychologically tortured her during dozens of interrogations over the course of 112 brutal days in Tehran’s notorious Evin prison.

“I was prepared I might face a few years in prison, or as they said 15 years, maybe I would never be released,” she said in a lengthy interview in Montreal. They threatened “they would send my dead body back to Canada.”

She said the interrogators tried to break her spirit. The worst part, she said, was when they played music from the funeral of her husband, who died in December 2014. They had found the music on Hoodfar’s iPad.

“One of the techniques they have is to make you cry,” she said. “I didn’t, so they played the music that was played when my husband’s body was removed from here (their Montreal apartment). That was the most difficult moment I had with them.”

Ms. Hoodfar was arrested on June 15, 2016, on the charge of threatening national security. She was freed on September 26, 2016, and sent back to Canada.