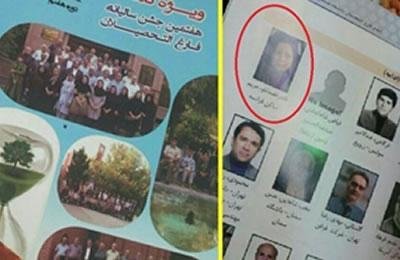 The name and photograph of Maryam Rajavi was published in the special issue of a magazine celebrating alumni of Tehran’s Sharif Industrial University, provoking wild reactions by the regime.

The state-run Jam News wrote that the Iranian Resistance’s President-elect had been listed among “former students who were cause of pride for the university.”

The state-controlled Iranian radio and television news network reported that 33 parliamentary deputies had issued a warning to the Minister of Science and Higher Education, “demanding explanation on the reason for printing (Maryam Rajavi’s) picture in the special issue of the Sharif University alumni.”

The state-run Mehr news agency also reported that the university’s president has censured this measure and ordered suspension of all the on-campus activities of the alumni association which he claimed had no organizational ties with Sharif Industrial University. Mehr pointed out that all copies of the magazine had been collected and the necessary legal actions are underway against those responsible.

Nevertheless, all of the Iranian regime’s major new media and social networks have widely reported and disseminated the news of publication of Mrs. Rajavi’s picture in the Sharif University alumni’s magazine.

Some of the regime’s media have reported that the picture had been published in the previous year’s issue as well.