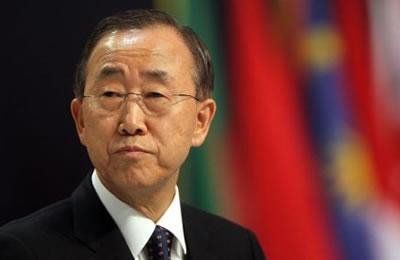 The latest report by UN Secretary General Ban Ki-moon to the UN General Assembly in September 2016 on the “Situation of human rights in the Islamic Republic of Iran” was made available to the public and the press, this week.

UNSG Ban Ki-Moon expressed regret in his report that, “Since the issuance of the most recent report of the Secretary-General to the Human Rights Council on the subject (A/HRC/31/26), human rights violations have continued at an alarming rate.”

He particularly underlined the large number of executions including of juveniles, the persistence of corporal punishment including flogging, the mistreatment of journalists and human rights defenders, as well as the persecution and prosecution of religious and ethnic minorities.

The report added, “On 19 October 2015, the Secretary-General expressed serious concerns about the alarming rate of executions in the Islamic Republic of Iran. He reiterated his call upon the Government to establish a moratorium on executions with a view to abolishing the death penalty… The Secretary-General regrets that the Government has not taken any measures to halt executions or instituted a moratorium on the death penalty.”

The UNSG report includes significant references to the conditions of women which are highlighted below.

The Secretary-General is concerned about the ongoing trend of using threats of torture, or actual torture, to extract forced confessions or other self-incriminatory evidence from prisoners or individuals detained by the police, especially those incarcerated for political ends. Such confessions are often used as admissible evidence in court proceedings.

The state of prisons in the Islamic Republic of Iran remains a major concern, owing to extensive overcrowding and high incarceration rates… Extremely limited living space, poor quality food, an insufficient number of toilets and showers and inadequate heating are all common features in many detention facilities.

People deprived of their liberty, particularly political prisoners, continue to receive inadequate access to health care. In many cases, medical treatment is reportedly withheld as a form of punishment to a degree so severe as to constitute torture. On 27 April 2016, a group of Special Rapporteurs publicly expressed concern at the situation of over a dozen political prisoners at risk of death owing to their worsening health conditions and the continued refusal by the authorities to provide them with medical treatment.

Between January 2015 and June 2016, at least 15 women were reportedly executed, mostly for drug-related offences and murder.

The Committee against Torture, the Human Rights Committee and special procedures mandate holders have repeatedly voiced concerns about the use of flogging, highlighting in particular its use against women, and called for its abolition.

On 20 January 2016, in a joint communication, a group of special procedure mandate holders expressed concerns at the imminent risk of execution by stoning of Fariba Khalegi, who was arrested in November 2013 on suspicion of involvement in the murder of her husband.

The United Nations human rights mechanisms hold the view that execution by stoning constitutes a form of torture or other cruel, degrading and inhuman treatment or punishment. The Human Rights Committee has also concluded that stoning to death for adultery is a punishment that is grossly disproportionate to the nature of the crime.

In May 2016, the authorities arrested at least eight Instagram users, most of whom were leading models in the Iranian fashion industry, for “un-Islamic acts” and “promoting Western promiscuity”.

Many barriers to marriage between Iranians and undocumented refugees remain, with women being unable to transmit citizenship to their children and their non-citizen spouses. Children born out of wedlock cannot obtain birth certificates or travel documents and are automatically barred from accessing public services.

Violations of the rights to freedom of movement and expression and the rights to health and work seriously affect women, as do the practices of underage marriage, killings in the name of honour and female genital mutilation. According to reports, 60 per cent of women in the Islamic Republic of Iran experience domestic violence (see A/HRC/31/69). According to the Global Gender Gap Report 2015, 21 per cent of Iranian women 19 years of age and under were married.

The Civil Code also requires women to be submissive to men and specifies that they may lose their rights, including to maintenance, if they fail to respond to the sexual needs of their husbands.

Senior government leaders have consistently made remarks that reinforce the traditional cultural roles for women. On several occasions, the Supreme Leader commented on the role of women in society and stressed that women’s greatest responsibility is to bear children and that women’s employment is not a primary concern of the country. That widespread attitude reflects the fact that only around 17 per cent of women between the ages of 15 and 64 are active in the labour market.

The Un Secretary General concluded his report by the following demands:

The Secretary-General remains deeply troubled by reports of executions, floggings, arbitrary arrests and detentions, unfair trials, denial of access to medical care and possible torture and ill-treatment. He is also concerned about continued restrictions of public freedoms and the related persecution of civil society actors, the persistence of discrimination against women and minorities and conditions of detention.

The Secretary-General reiterates his call upon the Government to introduce a moratorium on the use of the death penalty and to prohibit executions of juvenile offenders and those who were below 18 years of age at the time the offence was committed.

The Secretary-General urges the Government to create space for civil society actors to exercise their legitimate right to peacefully carry out their activities in safety and freedom, without fear of arrest, detention or prosecution.

The Secretary-General urges the Government to remove all discriminatory provisions in legislation that affect women, in accordance with international standards.

The Secretary-General urges the Government to take prompt steps to protect the rights of all persons belonging to religious and ethnic minorities and to remove and address all forms of discrimination against them.