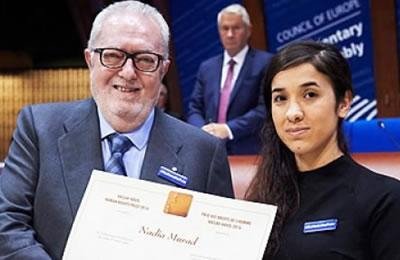 The Council of Europe awarded its Václav Havel human rights prize on October 10, 2016, to the Iraqi activist Nadia Murad.

Ms. Murad became the face of a campaign to free the Yazidi people and stop human trafficking after escaping ISIS in November 2014. The 23-year-old had been captured and enslaved three months earlier along with about 5,000 women and girls, including her siblings and mother.

Despite her own trauma, she took up a global campaign to draw attention to the plight of Yazidis being held in sex slavery or displaced by the ISIS.

The award, which honors outstanding civil society action in defense of human rights, comes with prize money of €60,000. The prize is named after Czech writer and dissident who served as president of his country after the fall of Communism.