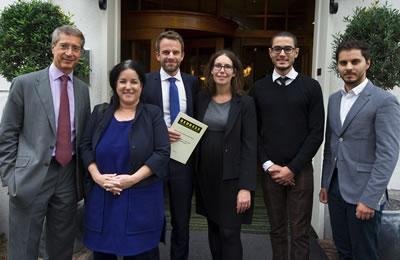 The British human rights NGO, REDRESS, issued a statement on October 13, 2016, calling on the British Government to publically call on the Iranian regime to immediately release Nazanin Zaghari-Ratcliffe and allow her to leave Iran with Gabriella, her daughter.

The NGO also urged UK to “consider bringing a case against Iran before the International Court of Justice if it continues to refuse consular access in dual national cases.”

It further asked Britain to “make the normalisation of diplomatic and trade relations with Iran conditional on Iran halting its arbitrary detention of dual nationals.”

The statement by REDRESS came in the wake of the statement issued by the UN Working Group on Arbitrary Detentions (WGAD) in which it urged the Iranian regime to “take the necessary steps to remedy the situation of Ms. Ratcliffe without delay.”

WGAD also added, “Taking into account all the circumstances of the case, especially the risk of harm to Ms. Ratcliffe’s health and physical integrity and to the well-being of her child, the Working Group considers that the adequate remedy would be to release Ms. Ratcliffe immediately, and to accord her an enforceable right to compensation in accordance with article 9(5) of the ICCPR.”

Iran: 16 were arrested in a Tehran party