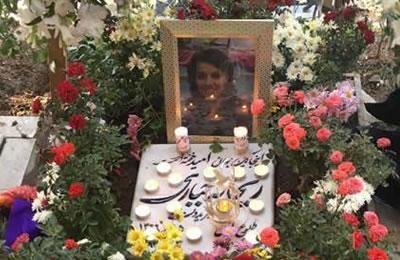 The memorial ceremony for Reyhaneh Jabbari was raided today, October 20, 2016, and her mother, Sholeh Pakravan, was arrested.

Reyhaneh Jabbari, 26, was executed on October 24, 2014, after 7.5 years of imprisonment for defending herself against rape by an Intelligence Ministry official.

The second anniversary of Reyhaneh’s demise was held at 3 p.m. at section 95 of Behesht-e Zahra Cemetery. Her mother made a daring speech demanding justice for the unfair execution of her daughter.

Other participants declared solidarity with Reyhaneh’s family and supported the campaign for abolition of the death penalty and prosecution of murderers of the Iranian youths and covered Reyhaneh’s tomb with loads of flowers.

Intelligence agents and security forces initially destroyed the equipment and chairs arranged for the memorial service and charged to disperse the people who had gathered for the ceremony but were forced to retreat in the face of the participants’ protest.

In addition to Ms. Pakravan, a number of her friends and individuals who had participated in this ceremony were arrested, and released later.