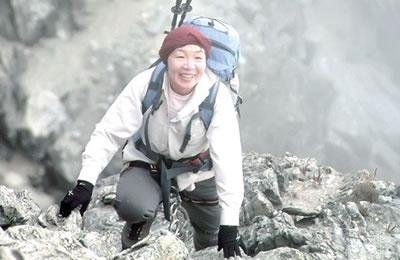 She devoted her adult life to scaling peaks, climbing the tallest mountains in more than 70 countries.

Her philosophy was to live life to the fullest.

To do so required defying stereotypes, and a supportive husband, in a country that thought a woman’s place was in the home. She founded the Ladies Climbing Club in 1969 with the slogan “Let’s go on an overseas expedition by ourselves,” and reached the summit of Everest on May 16, 1975, as the leader of the climbing party of an all-female Japanese team.

In 1992, she became the first woman to complete the “Seven Summits,” reaching the highest peaks of the seven continents.

Tabei died of cancer at a hospital outside of Tokyo, Japanese media reported Saturday.

She kept climbing even after being diagnosed with cancer four years ago, Japanese public broadcaster NHK said. Her goal was to climb the tallest mountain in all of the more than 190 countries of the world. She fell short, but ticked off four more as recently as 2015, according to her website, in Niger, Luxembourg, Belgium and Oman. (Associated Press – October 22, 2016)

Iran: Bahaii woman tells of pressure on her child