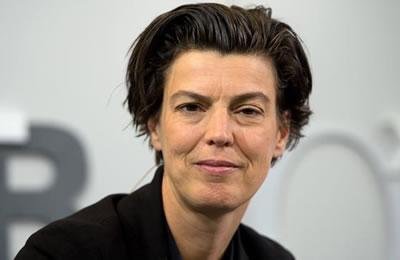 The German journalist and author Carolin Emcke has frequently written and reported from war zones and crisis regions. She is this year’s recipient of the prestigious Peace Prize.

The 2016 Peace Prize of the German Book Trade (was) handed out to journalist and author Carolin Emcke as the conclusion of the Frankfurt Book Fair on Sunday.

“In her highly personal and vulnerable manner, she regularly places herself in perilous living situations in order to illustrate – especially in her essays and reports from war zones – how violence, hatred and speechlessness can change people,” the association stated when the award was announced in June. “Carolin Emcke’s work has thus become a role model for social conduct and action in an era in which political, religious and cultural conflicts often leave no room for dialogue.”

Born in 1967 in Mülheim, in the Ruhr region, Carolin Emcke studied philosophy and wrote her dissertation on “Collective Identity.”

She now lives in Berlin as a freelance author. In essays and articles, Emcke has reported from Afghanistan, Pakistan, Iraq and the Gaza Strip.

Emcke has also worked as an editor at the weekly news magazine “Der Spiegel,” has been a freelance author for the weekly newspaper “Die Zeit” and writes a weekly column for the newspaper “Süddeutsche Zeitung.”

The winner of a number of prizes and distinctions, Emcke is the author of books including “Kollektive Identitäten – sozialphilosophische Grundlagen” (Collective Identities – Sociophilosophical Basics, Frankfurt, 2000) and “Echoes of Violence – Letters from a War Reporter” (Princeton University Press, 2007). Her newest book “Gegen den Hass” (Against Hate) is scheduled for publication in October 2016.

Awarded since 1950, the Peace Prize of the German Book Trade goes to persons – primarily authors, philosophers and scientists in Germany and abroad – “who make an outstanding contribution to realizing the ideal of peace through their activity in the fields of literature, science and art.”