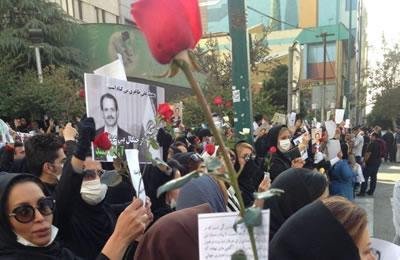 The fifth day of protest by women and prisoner rights advocates was held outside Tehran’s Baghiyatollah Hospital.

Security forces raided the gathering and made arrests. Since the very first hours, they took pictures and film from the gathering. Special Guards forces intervened and a motorcyclist unit attacked the demonstrators, including a majority of women, with clubs, batons and pepper spray. A number of participants had to be taken to medical centers.

Mohammad Ali Taheri is founder of cosmic mysticism (Erfan-e Halgheh). He was arrested in May 2011 and sentenced to five years imprisonment, 74 lashes and 900 million toumans of cash fine. The Iranian judiciary has refused to release Mr. Taheri after serving his sentence and has extended his prison term on new charges.