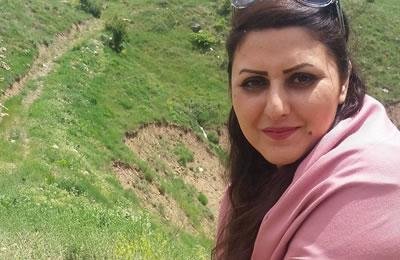 They broke into the house through the front door, and arrested Ms. Iraee without presenting any written warrant. They subsequently took her to the Evin Prison to start her six year prison sentence.

Ms. Iraee was arrested on September 6, 2014, along with her husband, human rights activist Arash Sadeghi, and two other rights activists, by a Revolutionary Guards Corps’ Intelligence unit.

She was detained three weeks at the IRGC Ward 2A at Evin and finally released on September 27, 2014, after depositing a bail bond of 80 million toumans for her activities on the Facebook.

Subsequently, however, she was convicted in absentia and sentenced to six years in prison without having the opportunity to defend herself. She was charged with insulting the sanctities and disseminating propaganda against the state.

Her husband was sentenced to a total of 19 years in prison.

“Golrokh Ebrahimi Iraee is the latest young writer and activist to be caught up in Iran’s relentless crackdown on artistic expression. Her imprisonment for peacefully voicing her opposition to stoning is a terrible injustice and an outrageous assault on freedom of expression. It is also a shocking and deeply disturbing display of support for the cruel and inhuman punishment of stoning,” said Magdalena Mughrabi, Deputy Director for the Middle East and North Africa at Amnesty International.

“Instead of doggedly intimidating and imprisoning critical voices, the authorities should abolish this cruel punishment once and for all,” said Magdalena Mughrabi.