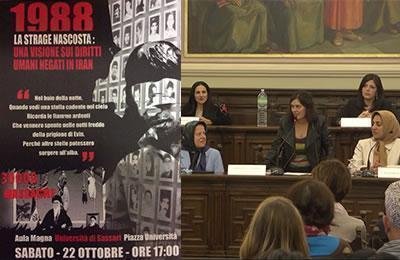 A conference was held in support of the Iranian opposition’s “Justice Seeking Movement” at the University of Sassari, Italy, on October 22, 2016.

The mayor of Sassari, the director of Amnesty International, and Italian representatives participated in the conference. A delegation from the Women’s Committee of the Iranian opposition National Council of Resistance of Iran addressed the conference as keynote speakers.

Dr. Virginia Pishbin, an Italian-Iranian, opened the conference and moderated the event. She emphasized the importance of condemning the mass executions as well as the repression of women by the clerical regime of Iran as such violations still continue.

Raffaella Sau, the political-cultural advisor of Sassari’s Mayor and a professor at the University of Sassari, welcomed the NCRI Women’s Committee delegation and said, “We teach human rights and western democracy to the students of this university. What our friends expect from us tonight is to awaken people’s conscience on the violations of human rights in Iran, particularly the 1988 massacre, with their documents… We must all speak out about these genocides and not remain silent. I appreciate you for your activities which shape our public opinion against violence and genocide in your country.”

The keynote speaker was Elaheh Arjmandi, a member of the NCRI Women’s Committee. Ms. Arjmandi spoke about the 1988 massacre of 30,000 political prisoners, mainly members of the PMOI, who were executed following Khomeini’s fatwa. She emphasized that after 28 years, it is time to seek justice on behalf of all those who were killed in this genocide and all the families who still do not know where their loved-ones have been buried.

Underlining the steadfastness of women and girls who were executed in the 1988 massacre, Elaheh Arjmandi said, “It has been reported that 80 percent of PMOI women detained in the women’s ward 3 of Evin Prison had been massacred by September 1988.” She explained a number of examples including the executions of pregnant women and a 15-year-old girl who had been taken to prison only two days earlier to break the resistance of her brother. Since she refused to denounce her executed brother, she was executed, as well.

Ms. Arjmandi also underscored the role of the current Iranian regime leaders who were members of the “Death Commission” ordering the 1988 massacre, including Mostafa Pourmohammadi, the current Minister of Justice under Rouhani. She urged the international community, particularly the UN, to set up a special court to prosecute the perpetrators of this horrible massacre.

Elham Zanjani was the next speaker. The NCRI Women’s Committee member elaborated on the suppression of women in Iran and the Iranian women’s resistance against the regime, about which there is little common awareness in the world.

Ms. Zanjani said, “A fundamentalist regime has been ruling Iran for more than 37 years. Its main character is enmity to women. In the past 3-4 decades, nowhere in the world have women been tortured and executed in such great numbers or assaulted in prisons as they have been in Iran. 120,000 members of our movement have been executed by the Iranian regime for their opposition, at least 30% of whom were women.”

Ms. Zanjani added, “Our movement is led by a woman; her name is Maryam Rajavi. She is a Muslim woman who believes in the separation of religion and state and has drafted a ten-point plan which states our belief in full gender equality in political, social and economic arenas.

“After the overthrow of the mullahs’ religious tyranny, we plan to abolish the death penalty and create a democracy based on freedom, equality, and separation of religion and state.”

In conclusion, she called on every one to support the suffering women of Iran and the Iranian Resistance.

Samira Nariman representative of the Association of the Iranian Youths in Italy next addressed the conference, explaining her group’s activities in support of the Justice Seeking Movement. She explained why, as an Italian-Iranian, it is important for her to use every opportunity to be the voice of all the suppressed youths in Iran. Ms. Nariman emphasized that she and many others will continue to use every opportunity to speak about the rights of Iranian youths.

The first part of the conference ended with a presentation by four Italian women who introduced four PMOI women executed in the 1988 massacre: Monireh Rajavi who had two young daughters and was executed only because she was the sister of the Iranian Resistance’s Leader. Shekar Mohammadzadeh, a nurse, who was arrested for caring and saving the lives of those who had been beaten up or shot by the Revolutionary guards during a demonstration. Dr. Shourangiz Karimian, a physician from the UK who was executed along with her sister, and the National Volleyball Team player Forouzan Abdi.

In the second part of the conference, Dr. Stefania Fusco, a lecturer of law from Sassari, and Dr. Maria Cristina Carta, lawyer and international law expert, addressed the conference.

Dr. Fusco discussed the misogynistic laws of the mullahs’ regime and the suppression of women in Iran as a fundamental pillar of the clerical regime. She thoroughly listed women’s fundamental rights, compared them to the articles of the Iranian regime’s Constitution and explained why the foundations of such a regime is based on suppression of women.

Dr. Carta focused on the available options for prosecution of the perpetrators of the 1988 massacre by expounding on international treaties and laws that can back up this demand. She expressed confidence in the Justice Seeking Movement and pledged her support. Dr. Carta stressed on the necessity of bringing the perpetrators of the 1988 massacre to justice.

The last speaker for the day was Mr. Nicola Sanna, the mayor of Sassari. While commending the conference held in honor of the martyrs for freedom, he congratulated the participating women, “particularly since the president of the Iranian Resistance is a woman. This is of great significance because women lead the resistance on the national and international levels and they are the champions of freedom and democracy. This is very constructive and informative for all, especially for us who are involved in governmental and legislative bodies, to fulfill our duty of stirring up the global conscience and urge justice against violence not only against women but against the whole Iranian society.”

He declared, “We and our city are on the side of the freedom fighters and the revolutionaries.

We welcome the delegation of the Iranian Resistance and we support their struggle for freedom and democracy.”

Dr. Virginia Pishbin concluded the conference by reading a statement condemning the 1988 massacre in Iran. The statement was subsequently signed by the guests and the participants.

An exhibition on the 1988 massacre was also held on the first floor of the university.

The conference was covered by the local media and television.