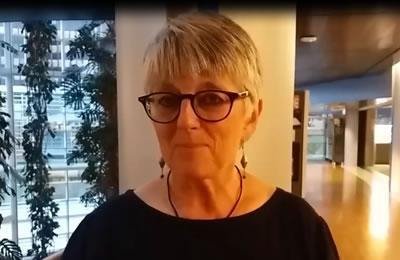 Julie Ward, Member of the European Parliament, commemorated Reyhaneh Jabbari by sending a message on the second anniversary of her unjust execution on October 25, 2016.

I am speaking to you from the European Parliament in Strasbourg.

This week is the second anniversary of the criminal execution of Reyhaneh Jabbari, a young Iranian interior decorator, who was hanged on 25 October 2014 for the simple reason of having defended her dignity at the age of only 19 when an agent of the regime tried to sexually assault her. She was kept in jail for 7 years and was under constant pressure to give in and make false confessions.

I have just spoken in the European Parliament’s plenary session about human rights abuses in Iran and I commemorated the second anniversary of Reyhaneh’s execution.

Reyhaneh was a true hero! She was offered her life in exchange for the price of humiliation. She knew the consequences of her choice, but she wouldn’t accept dishonour, and so she went to her death.

Reyhaneh’s mother, Sholeh (Pakravan), has now taken up the call for justice for her brave daughter. She has spoken out and launched a campaign against the death penalty in Iran. She has said:

“I breathe today for an Iran free from executions. I have no fear for any obstacles and challenges. I am looking to the beast right into his eyes. I am waiting for the final blow so that all gallows will go to the museums of history of Iran.”

I want to salute Sholeh and her brave campaigns. Be sure, that our hearts are with you all the way and we will not remain silent until justice has been done for your brave daughter.