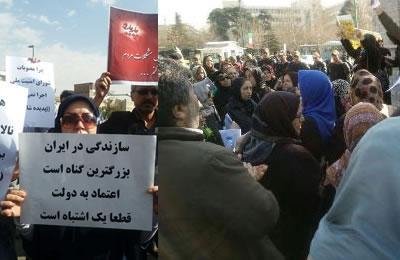 On Tuesday, November 1, 2016, some 200 Literacy Movement teachers converged from across the country to take part in a major protest outside the parliament in Tehran

concurrent with the presence of the mullahs’ president Hassan Rouhani in the parliamentary session to defend his three new ministers. The protesting teachers demanded determination of their employment status.

Also a large number of demonstrators who have lost their deposits with the government also participated in the major rally. They chanted:

Theft and corruption by the Ministry of Finance

This much embezzlement has turned Iran into Karbala (a killing field)

Rouhani’s cabinet was blind and did not see the theft

Shareholders of Padideh have only heard lies

Those who claim to have faith, have betrayed all the time

Today is a day of mourning, because the nation’s life is insecure

We will not leave until we get an answer.

Protesters also held up a placard which read, “Building the country is the greatest crime in Iran, trusting the government is definitely a mistake.”