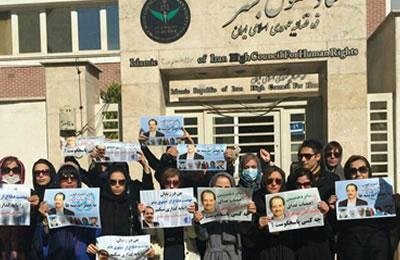 Supporters and students of prisoner of conscience Mohammad Ali Taheri staged a protest gathering on Thursday, November 3, 2016, outside the Judiciary’s building in Tehran,

on the 37th day of his hunger strike. There is no information available on Mr. Taheri’s present condition.

Mohammad Ali Taheri is the founder of cosmic mysticism (Erfan-e Halgheh), a school of thought that has been banned by the Iranian regime. Mr. Taheri was arrested on May 4, 2011, and sentenced to five years imprisonment, 74 lashes of the whip and 900 million toumans in cash fine. He has completed serving his sentence, but officials refuse to release him. This is the sixteenth time Mr. Taheri has started a hunger strike.