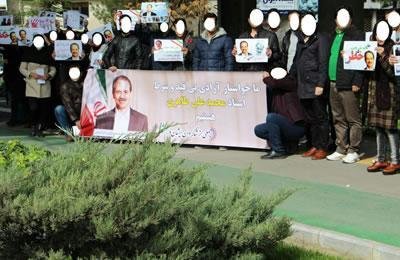 More names have come out on women who have been arrested and detained for protesting the illegal continued incarceration of prisoner of conscience Mohammad Ali Taheri.

Maryam Atarodi and Atefeh Pourghassem were also among those arrested on October 31st in a demonstration outside the Baghiyatollah Hospital in Tehran, where Mr. Taheri is hospitalized while on hunger strike.

Previously, the names of Bahareh Basseri, Parvin Solaimani, Badri E’raj, Zahra Bozorgpour, Saeedeh Goudarzi, Sepideh Mahzoun, Akram Panahi, Melika Kavandi, Nahid Babazadeh, Baharak Azarnia, and Zahra Shafii had been announced as women detained in the Qarchak Prison of Varamin and Fashafouyeh Prison of the Greater Tehran who have been on hunger strike since the time of arrest.

More gatherings have been held in various cities including Mashhad, Gorgan, Kermanshah, Karaj, Shiraz, Roudehen, and Isfahan in support of Mr. Taheri, founder of the school of cosmic mysticism (Erfan-e Halgheh). Mr. Taheri’s supporters include a large number of women.

Mr. Taheri was arrested in May 2011 and sentenced to five years imprisonment, 74 lashes and 900 million toumans of cash fine. The Iranian judiciary has refused to release Mr. Taheri after serving his sentence and has extended his prison term on new charges. Mr. Taheri has started his sixteenth hunger strike since September 28th.