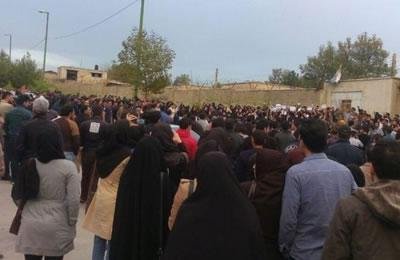 Iran: Extensive protests to the death of a young woman

The people of Khorramabad staged an extensive demonstration in protest to the death of a young woman, a university student, in the flood in Khorramabad, capital of the western Iranian Province of Lorestan.

Monday, November 7, 2016, a girl student who was waiting for the bus to go to the dormitory fell into the water canal and died when heavy rain flooded the capital city. Another girl student had to be taken to the ICU to receive treatment.

Forouzan Moradvand, from Ilam, was a student of biology. The second girl was Nasrin Mohammadi, from Isfahan, who was studying urban planning but is now fighting for her life on the ICU bed.

The demonstrators in Khorramabad chanted, “Incompetent mayor, shame on you, shame on you” and “Murderer of Forouzan, Resign!”

The video clip below shows the moment Forouzan Moradvand falls into the water canal.

Iran: Savage blinding of both eyes of a prisoner