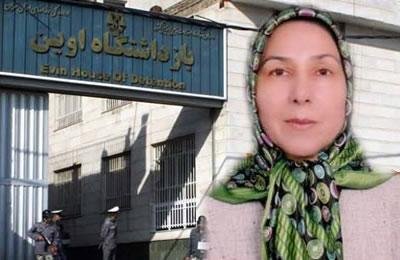 Political prisoner Sedigheh Moradi has sent out a letter from prison revealing part of the crimes of the clerical regime and demanding that the perpetrators be prosecuted by an international court.

Sedigheh Moradi who is imprisoned in the women’s ward of Tehran’s Evin Prison under deplorable conditions, was also imprisoned in the 1980s as a teenager. She was eyewitness to numerous executions in 1981 and the massacre of political prisoners in 1988. Her letter reads:

In the name of God

Thousands of salutes to all freedom-loving people

My name is Sedigheh Moradi. I was born in 1960. I was arrested in 1981 for supporting the People’s Mojahedin Organization of Iran. I was initially imprisoned in Qezel-Hessar Prison, and subsequently transferred to the Evin Prison.

During this period, I witnessed how some of my cellmates were separated from us and taken for execution by the firing squad. At nights, we counted the coups de grace and learned of their fates.

I was arrested again, in 1985 and served my sentence at Evin Prison. I am one of the eyewitnesses of the massacre of political prisoners which lasted from July until September. A large number of prisoners in our ward were separated and taken for execution. There were friends who said farewell and never returned.

Azadeh Habib, Ashraf Fadaii, Monireh Rajavi, Mansoureh Moslehi, Parvin Ha’eri, Mojgan Sorbi, Maryam Golzadeh Ghafouri, and many more. There were so many prisoners in those days, that I can hardly remember all of their names.

I cannot find any words to describe such cruelty and ruthlessness.

I was arrested for the third time in 2011 and sentenced to ten years in prison by an unfair court headed by Judge Moghiseh. I have an 18-year-old daughter from whom I have been separated for five years. I have been kept in detention despite the various illnesses and the deplorable physical conditions at age 56.

As an eyewitness to the massacre in 1988 when I was imprisoned, I urge all human rights organizations and institutions and freedom-loving human beings to legally deal with those responsible for this massacre for the sake of those innocent people whose rights were trampled by being executed in 1988.