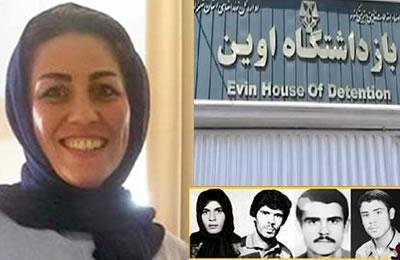 Different groups of people from across the country have declared their solidarity with political prisoner, Maryam Akbari Monfared, in her call for justice for her executed siblings.

A group of activist mothers in Mashhad (northeastern Iran) issued a statement, declaring, “Maryam Akbari has two children. She has lost four members of her family… So, we support her.”

Young journalists in Qazvin (northwest of Tehran) wrote an article in which they noted, “We condemn the continued incarceration of this prisoner (Maryam Akbari Monfared) and demand her immediate freedom. We urge the International community to attend to this case.”

University students in Iranshahr (southeastern Iran) declared support for Maryam Akbari and wrote, “One sister and three brothers of hers were executed… It has been eight years that she has been imprisoned and separated from her children. We condemn her continued incarceration with no leaves.”

A group of youths in Tehran also expressed their solidarity with Ms. Akbari and noted, “The call of justice-seeking has surpassed all streets… and all prisons. Shackled prisoners seek justice with an admirable courage. So, it is our duty to be her voice… We declare support for Maryam Akbari’s call for justice and demand her release.”

Iran: Nurses do not get paid