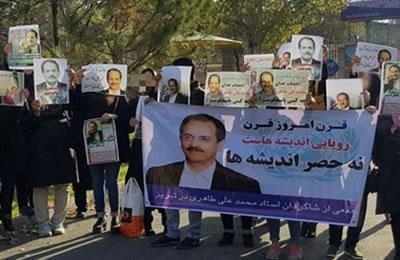 A number of women and rights activists staged protests in five cities across Iran on November 11 and 12. The gatherings in Tehran, Karaj, Tabriz, Mashhad,

and two other cities in Mazandaran demanded freedom of prisoner of conscience Mohammad Ali Taheri.

Mr. Taheri, founder of Cosmic Mysticism (Erfan-e Halgheh), is presently on hunger strike in prison and judiciary and security officials have refused to release him despite completion of his prison sentence.

Iran: Nurses do not get paid