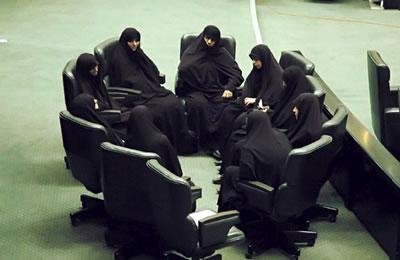 Iran: Women used as decorations in the mullahs’ parliament

The Iranian regime’s policies against women’s presence and participation in society and government have got to the point which drive even the government-backed media and press to voice objections.

The state-run Javan newspaper published an article on November 13, in which it acknowledged the fact that women do not have any effective role in the mullahs’ parliament.

Javan wrote, “A political activist woman made the following comment in expounding on women’s conduct in the recent parliamentary tenures: Women’s presence in the parliament has turned into a decorative and ornamental presence. Women do not make any effort to change the situation of women in society.” (The state-run Javan newspaper – November 13, 2016)

Numerous regime officials and parliamentary deputies have confessed in the past that women who get into the parliament are themselves among the most misogynous people and sponsor anti-women legislatures.

Iran: Woman attacked by acid after being denied legal support