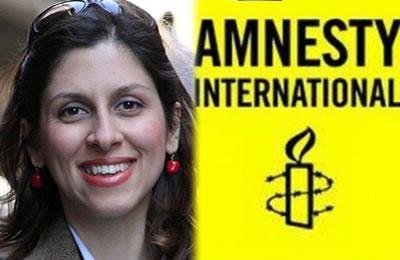 Fears are growing for the physical and mental health of Nazanin Zaghari Ratcliffe, a British-Iranian charity worker who is serving a five-year prison sentence in Iran, convicted of “national security” charges after an unfair trial, said Amnesty International.

Her husband, Richard Radcliffe, told the organization that her health has sharply deteriorated in recent weeks and she has even contemplated suicide. She became so unwell that the authorities arranged an emergency family visit for her on Friday, November 18, 2016. She is suffering from heart palpitations in addition to pain in her hands, arms and shoulders and blurred vision. She also began a hunger strike on 13 November to express her despair over the prospect of never being released.

“The news of the decline in Nazanin Zaghari Ratcliffe’s health is deeply alarming. Her imprisonment on spurious ‘national security’ charges has been utterly unjust,” said Philp Luther, Research and Advocacy Director for the Middle East and North Africa at Amnesty International.

“After her arrest, she was separated from her baby daughter and held in solitary confinement for 45 days. Instead of prolonging her pain and suffering, the Iranian authorities must end her ordeal by releasing her immediately and unconditionally.”

During an emergency family visit, Nazanin’s mother collapsed when she saw how thin her daughter had become since her imprisonment. Nazanin agreed to end the hunger strike for the sake of her baby daughter.

Despite two visits to the clinic at Tehran’s Evin Prison her husband says she has not received adequate medical care.

Her husband told Amnesty International that over the past few weeks she had reached “breaking point.” He said her spirits had sunk so low that she even wrote a suicide letter to him. She gave the letter to her cellmate but has not talked about suicide since.

“Nazanin Zaghari Ratcliffe’s ordeal has caused her immense despair and suffering. It is shocking that the Iranian authorities are adding to her pain by failing to grant her adequate medical care,” said Philip Luther.

The Iranian authorities announced earlier this year that her arrest was linked to her involvement with a network of bloggers imprisoned in 2014 for taking part in journalism training courses.

On 15 June, Iran’s Revolutionary Guards released a statement saying that Nazanin Zaghari Ratcliffe had “participated in devising and carrying out media and cyber projects aimed at the soft overthrow of the government”.

Amnesty International believes she is a prisoner of conscience who has been imprisoned solely for the peaceful exercise of her rights to freedom of expression and association.