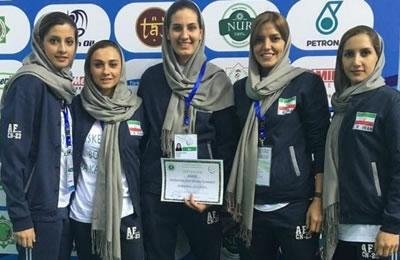 The young women and female athletes who participated in basketball competitions in Turkmenistan and won in one of the fields, were threatened to be summoned by the Iranian Ministry of Sports and Youths and dealt with accordingly.

A team of young women travelled to Turkmenistan on their own expense and without supervision of the Basketball Federation, to participate in the three-woman team tournaments. Delaram Keshmiri beat her Russian rival and won in the 3-point-shooting competition.

Upon their return and dissemination of the news, the Iranian Basketball Federation threatened to deal with the athletes who participated in these games.

Ali Towfiq, the federation’s secretary, said, “How should we know that they really were wearing the veil? Nonetheless, their journey without permission of the federation and the Extraterritorial Council, was not lawful and we will deal with them accordingly.”

In reaction to public outrage over this issue, however, the Ministry of Sports backed down and the public relations officer of the ministry, Maziar Nazemi, said that summoning of the young women was not the policy of the Sports Ministry.

The International Basketball Federation (FIBA) does not allow Iranian women to participate in international tournaments while wearing the mandatory veil. However, it gave a two-year grace period to Muslim countries during which they could participate in international tournaments and lobby for permission for the Islamic veil. During this period, however, the Iranian Basketball Federation managed to hold only one camping tour for women basketballers in Turkey, something that led the young women to act on their own.