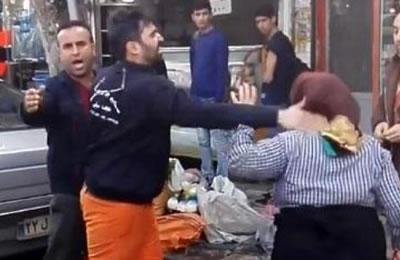 Slapping a peddler woman in the northern Iranian city of Fouman caused a wave of outrage among the public across the country.

Thursday, November 17, a destitute woman who was peddling in the street to earn her living, was attacked by a municipality agent. After removing her stuff, the municipality agent engaged in a verbal confrontation with the defiant woman and beat her in the head.

The woman’s son uploaded an audio clip on the internet demanding public support for his mother, saying, “She did not deserve to be slapped!”

On the other hand, the video clip on this violent encounter with an elderly woman in the street, went viral and outraged the Iranian public. They shared a design similar to traffic signs, which shows a policeman hitting a citizen, and wrote, “Municipality agents at work! Do not disturb!”

The videoclip below shows the scene of confrontation and beating of the woman.