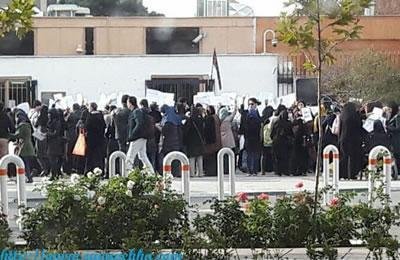 The gathering of women and apprentice of prisoner of conscience Mohammad Ali Taheri was viciously attacked by security forces on Monday, November 21, 2016, across from the parliament.

Security forces and plainclothes agents arrested at least 50 people in this raid and took them away.

The video clip below shows scenes of the savagery of security forces against protesting women exercising their freedom of speech.

Mohammad Ali Taheri, on the 56th day of his hunger strike, is the founder of Cosmic Mysticism (Erfan-e Halgheh) who has completed his five-year sentence, but officials refuse to release him.