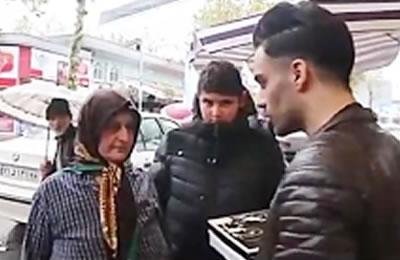 Following the November-17 beating of a peddler woman by a municipality agent in Fouman (northern Iran), she received a large wave of solidarity from across the country.

Among them, a group of Tehran’s artists sent a gift and their representative to visit the woman on November 21, 2016.

The oppressed woman later had an interview explaining about her living conditions: “It has been seven years that I have been selling vegetables and sour relish in the street where the incident took place. On that day, two agents of the municipality of Fouman ordered me to wrap up my stuff and leave. I put my things on the pavement next to a tree but they returned and started insulting me. They kicked by belongings and broke the jars of relish and took away my vegetables and put them in their van. I was trying to prevent them, when one of them slapped me in the face… Even if they kill me, I will not go anywhere else. I earn my living in that place and that is where I run my business.”