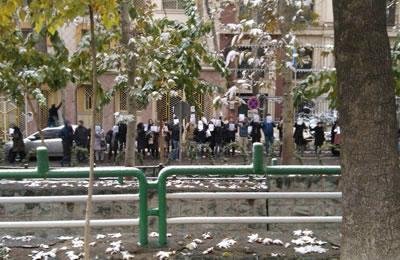 Iran: Women’s gathering in front of the UN office in Tehran

Dozens of women and supporters of the prisoner of conscience Mohammad Ali Taheri, staged a protest rally on the morning of November 22, 2016, outside the office of the United Nations in Tehran to continue their protest to Mr. Taheri’s continued detention by the Iranian regime.

The day before, security forces attacked a similar demonstration outside the parliament (Majlis) and arrested some 50 people including at least 30 women.

The protesters handed in some documents on the November 21st attack to the UN office.

Mohammad Ali Taheri reportedly went unconscious on Monday, November 21, on the 55th day of his hunger strike and was transferred to the emergency room of Evin’s dispensary.