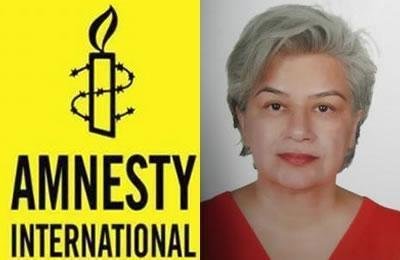 Amnesty International issued an urgent action on November 24, 2016, warning about spurious charges against human rights defender Mansoureh Behkish and the danger of her being arrested. The statement reads:

Iranian human rights defender Mansoureh Behkish is facing trumped-up national security charges for peacefully defending the right to truth and justice concerning the mass killings of political prisoners, including her siblings and brother-in-law, during the 1980s in Iran. If imprisoned, she would be a prisoner of conscience.

Iranian human rights defender Mansoureh Behkish was informed on 29 October that she had been charged with “gathering and colluding to commit crimes against national security” and “spreading propaganda against the system”. She is active with a group known as the Mothers and Families of Khavaran, which is comprised of mothers and other family members of political prisoners summarily executed during the 1980s in Iran.

She was charged after being interrogated twice – on 22 and 24 October – by Ministry of Intelligence officials about her peaceful truth and justice seeking activities, including: holding commemorative gatherings at her home for political prisoners summarily executed or forcibly disappeared during the 1980s, including her sister, four brothers and brother-in-law; paying visits to the families of victims; taking flowers to Khavaran, a deserted gravesite in south Tehran where some of the thousands of political prisoners who were extrajudicially executed in the summer of 1988, including two of her brothers, are buried in unmarked mass graves; and posting her writings about Iran’s human rights violations on Facebook and other online platforms. She was denied her right to be accompanied by a lawyer during the interrogation sessions. She has since been informed that the Office of the Prosecutor has banned her two lawyers from accessing her case file.

Mansoureh Behkish has a previous suspended sentence, which she received following a 2011 conviction of “gathering and colluding to commit crimes against national security”, also related to her human rights work with the Mothers and Families of Khavaran, as well as with another group called the Mothers of Laleh Park, which is largely comprised of women whose children have been killed, disappeared or detained in Iran’s post-election violence since June 2009. If convicted of the fresh charges levelled against her, the suspended sentence may also be activated.