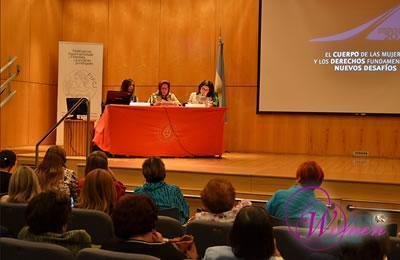 A delegation from the Women’s Committee of the National Council of Resistance of Iran participated in an international conference held November 14-17, 2016, in Buenos Aires, Argentina, and informed the participants of the plight of Iranian women as well as the campaign seeking justice for victims of the 1988 massacre in Iran.

The conference entitled, “Women’s Body and Fundamental Rights: New Challenges”, was sponsored by the International Federation of Women in Legal Career in line with the objectives of the UNIFEM to achieve Planet 50-50 by 2030.

Prominent jurists from North America, Latin America, Africa and Europe were in attendance and discussed reasons for inequality in various countries in law, in practice and with regards to women’s basic rights. They proposed different solutions from a legal point of view.

The four-day conference was opened by Dr. Maria Elena Elverdin, President of the International Federation of Women in Legal Careers (FIFCJ) and president of Argentina’s Association of Women Jurists.

Dr. Elverdin pointed out, “The FIFCJ’s work has been focusing on the rights of women and girls since 1928. For some time, the focus of our discussions has been the positions in which states take in reference to women’s body as this is an area where we, women of legal careers must exercise our rights to defend women. The origin of this topic comes from the understanding that the body is a construction of social and cultural appearance, behavior and representation which responds to the changing conditions of time.

“Last year in Barcelona, we had our first conference on this topic and in conclusion, we decided that the persistence in the violation of our rights is the result of patriarchal ideology that is encoded in the body of women and girls. This is what increases inequalities and discrimination on the basis of gender. Hence, what arises is the question of how to counter this complex matter and what the challenges are, how to face the future and how to point out the problems and find its solutions. The prime goal of this conference is the way to address this task collectively.”

Dr. Susana Medina de Rizzo, President of International Association of Women Judges, “It is time that as judges, we unite to help the women and girls around the world. When we unite, we women will succeed together in safeguarding the fundamental rights of women.”

Dr. Elena Highton de Nolasco, deputy Judge of the Supreme Court of Argentina, observed, “The body of women is regarded as an object and all that is considered is her beauty. However, women are far more than this and this violence against women must stop. Unfortunately, the word of women is not important even when it comes to the tribunal. It is not listened to in comparison to when men speak. This must change.”

The speakers concurred that unity of women is needed to destroy violence against women and differences imposed against women.

Maryam Rajavi hailed the sponsors of the conference and reiterated that the Iranian regime has created many obstacles for women’s participation in the job market and violence against women is institutionalized in the regime’s laws and constitution. “Systematic misogyny and persistent male-domination over the society are the mechanisms through which the regime exerts control on society and holds its grip on power. However, the Iranian women have not surrendered and played key role in the resistance against the regime. They pioneer the resistance movement and have promoted the notion of equality throughout society. We advocate women’s equal participation in leadership in tomorrow’s free Iran.”

During the conference, Ms. Elaheh Arjmandi, Elham Zanjani and Melika Ziaei from the NCRI Women’s Committee informed the participants about the institutionalized suppression of women under the religious dictatorship ruling Iran.

Ms. Arjmandi addressed the conference and spoke about the Iranian Resistance’s Justice Seeking Movement for 1988 massacre of 30,000 political prisoners in Iran, particularly the torture and hanging of thousands of women. She called for prosecution of the perpetrators of this crime against humanity, especially the incumbent Iranian Minister of Justice who was a member of the Death Commission in that year and personally involved in the massacre.

Ms. Arjmandi’s speech attracted much interest from the jurists who said the international community’s failure to prosecute the perpetrators, particularly those holding key positions of power, is a shame for international justice.

The NCRI Women’s Committee delegation also spoke to the participants about the women imprisoned in Iran, particularly Ms. Maryam Akbari Monfared, from the families of victims of the 1988 massacre who has turned into a symbol of the Justice Seeking Movement for the 30,000 executed. The lawyers and jurists expressed solidarity with this great woman and pledged to work towards restitution of the rights of this brave woman and other women who are incarcerated in the medieval prisons of the Iranian regime.