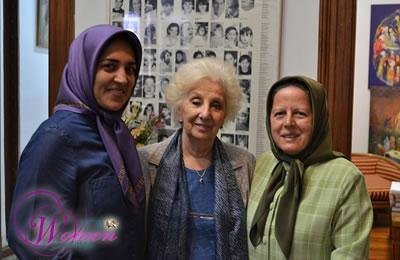 A delegation from the NCRI Women’s Committee met with Ms. Estela Barnes de Carlotta, President of the Association of the Grandmothers of the Plaza de Mayo, in Buenos Aires, Argentina.

The Association of the Grandmothers of the Plaza de Mayo is a human rights organization seeking to find the children illegally abducted during the Argentine Dirty War.

Elaheh Arjmandi and Elham Zanjani lauded the 39-year efforts of Ms. Barnes de Carlotta and other members of the association to seek justice for the children killed or forcibly disappeared by prosecution of those responsible for these crimes. These efforts demonstrate the true image of these brave mothers and tireless women of Argentina to the world.

Ms. Estela Barnes de Carlotta expressed her pleasure over meeting the NCRI Women’s Committee delegation, adding that she has been following up on the news of the Iranian people’s resistance against the ruling dictatorship and despite large number of executions and torture.

The NCRI Women’s Committee delegation showed Ms. Barnes the book containing the names and pictures of 20,000 victims of execution from the PMOI and explained about the resistance of women in the Iranian regime’s prisons. They explained about the resistance of the 13-year-old Fatemeh Mesbah and of Massoumeh Azodanlou who was viciously tortured and subsequently executed while eight-months pregnant.

Ms. Barnes de Carlotta who has suffered tremendously herself, was very impressed by the stories of women of the Iranian Resistance. She said, “My daughter was also pregnant when she was arrested, but the Colonels let her stay in the concentration camp until she delivered her baby. They sent out her infant and cleared all traces of the baby, and then executed her. The execution of 13-year-old girls and pregnant women with their innocent fetuses is unbelievable for me!”

22823 women have been killed or disappeared in Syria