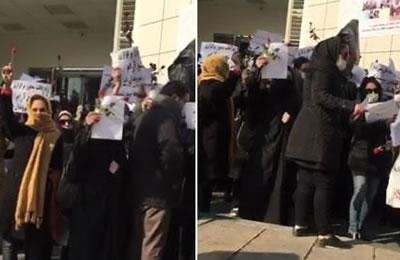 A number of women were badly beaten up or arrested while participating in a protest gathering outside the Ministry of Interior in Tehran.

More than 100 women and human rights activists staged a protest in the morning of Saturday, November 26, 2016, in front of the Interior Ministry. Their gathering was violently attacked by the State Security forces and plainclothes agents who arrested a number of women and badly injured a few when beat them with batons.

Security forces also used violence to take away the protesters’ mobile phones and prevent them from taking films and pictures of the attack.

The demonstrators demanded freedom of prisoner of conscience Mohammad Ali Taheri who is on the sixtieth day of his hunger strike. Mr. Taheri has completed his five years in prison but officials have refused to free him and are fabricating new charges against him.