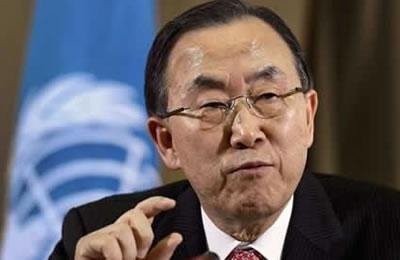 In a message marking the International Day for the Elimination of Violence against Women, UN Secretary General Ban Ki Moon said violence against women and girls is not only a human rights violation but also a serious obstacle to sustainable development.

He called for “meaningful” action to prevent and respond to such violence which “imposes large-scale costs on families, communities and economies.

UNSG explained that violence jeopardizes women’s employment, much-needed income, autonomy and their ability to leave abusive relationships. It also results in lost productivity for businesses, and drains resources from social services, the justice system and health-care agencies. The net result “is enormous suffering as well as the exclusion of women from playing their full and rightful roles in society,” he stressed.

Mr. Ban Ki Moon said efforts to address such violence, while having strong political commitment, suffer from lack of resources, including funding. He called on governments to increase national spending in all relevant areas, including women’s civil society organizations.

He also called on world leaders as well as private sector, philanthropists and concerned citizens to contribute to the UN entities working for gender equality.

In December 1999, the UN General Assembly designated 25 November as the International Day for the Elimination of Violence against Women, inviting governments, international organizations and non-governmental organizations to hold activities designed to raise public awareness on the issue.

The Day also commemorates the brutal assassination in 1960, of the three Mirabal sisters, political activists in the Dominican Republic, on orders of Dominican ruler Rafael Trujillo.