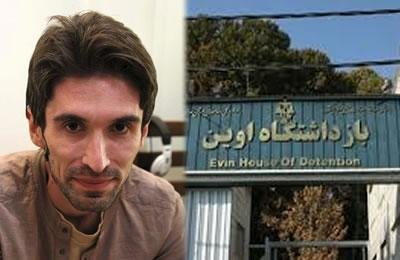 Simultaneous with the International Day for the Elimination of Violence Against Women on November 25, political prisoner Arash Sadeghi sent out an open letter explaining that his hunger strike aims to defend the freedom-loving women who are imprisoned.

Mr. Sadeghi, on the 36th day of his hunger strike, explained the story of his mother who was killed at the age of 43 because of violence against her during his arrest six years ago at home. He also described his wife, Golrokh Iraee, as an example of numerous Iranian women who have been imprisoned for feeling responsible for their society.

In part of his open letter, Mr. Sadeghi recounts the story of security forces’ attack on their house to arrest him and how they injured his mother. “Six years pass since the passing of my mother… She was neither a political activist nor a civil activist. She was a woman, a mother. In that autumn morning, when the privacy of our home was broken, my mother was standing there trying to protect the sanctity of her home… Doctors initially confirmed that she had suffered a heart stroke due to a strong shock. Several months later, however, the forensic doctor said she had internal hemorrhage in the skull and then a heart failure caused her death.”

Then he points to the illegal arrest of his wife and the fact that she was deprived of defending herself at the court.

“Although I decided to go on hunger strike on October 24, to protest Golrokh’s illegal detention and demand her legal freedom, but this is not intended to defend just one woman. Golrokh is an example of the innocent women in our society who are imprisoned because they are humane and they feel responsible. These are women who protect their human identity and seek a society devoid of discrimination and denial of women. Today, for me, Golrokh is an example of the innocence and oppression of Zeinab Jalalian, Nargess Mohammadi, Fahimeh Ismaeli, Maryam Akbari Monfared, Fatemeh Mosanna, Azita Rafizadeh, Hajar Piri, Afsaneh Bayazidi, Reyhaneh Haj Ibrahimi, Elham Farahani, Mahvash Shahriari, (and) Fariba Kamalabadi.”

Iran: Some 30 Kurdish women faced arrests and jail in 9 months