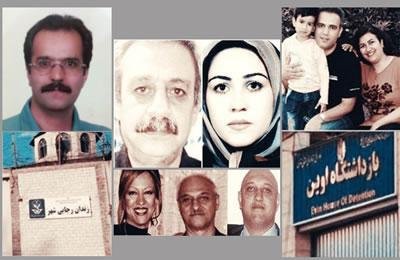 For the second time in recent months, five prisoners detained in Gohardasht Prison of Karaj have been deprived of visiting their relatives.

Their relatives are also prisoners, detained in the women’s ward of the Evin Prison. This is said to be a reprisal for the men who refuse to wear the prison uniform and the handcuffs and shackles.

The names of the prisoners are:

Bahaii prisoners of conscience Adel and Shamim Na’imi whose wife and mother, Elham Farahani, is detained in Evin;

In another development, the Iranian judiciary has issued a ruling to evacuate and confiscate the house belonging to the imprisoned couple Hassan Sadeghi and Fatemeh Mossana.  They have two children. The couple’s properties had already been confiscated before they were arrested, but now their only remaining property which is their house is going to be evacuated and confiscated while both of them are in prison.