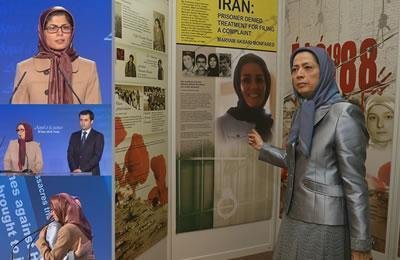 Moving testimonies by prisoners at “Call for Justice” Conference

Simultaneous with the International Day for the Elimination of Violence against Women, two women, former political prisoners in Iran, who managed to leave their country recounted the stories of their torture and mistreatment in the Iranian regime’s prisons at a conference in Paris.

The meeting entitled, “Call for Justice; End Impunity for Perpetrators of Crimes against Humanity in Iran and Syria,” was held at Mutualité Conference Center on November 26, 2016. The conference’s keynote speaker was the Iranian Resistance’s President-elect Maryam Rajavi while a number of personalities, jurists and experts on international law and crimes against humanity attended the gathering and delivered speeches. Four former political prisoners who have recently managed to leave the country also addressed the audience.

The conference started with the opening remarks by Ms. Florence Berthout, Mayor of Paris’ 5th District, who welcomed the participants. She asserted, “Some 1000 executions took place in Iran last year… We must mobilize against the abuses of the Iranian regime.”

The conference was moderated by Ms. Sylvie Fassier, Mayor of Le Pin, who introduced and invited Mrs. Rajavi to address the audience.

Maryam Rajavi focused attention on the Iranian regime’s crimes in Iran and Syria. In part of her remarks, she pointed out, “Under the mullahs’ rule, many cries have been suffocated, much blood has been spilled unjustly, and many rights have been trampled. Now the time has come for seeking justice for the spilling of blood and the trampled rights, and of course for the most fundamental right of the Iranian people to freedom and sovereignty.”

Maryam Rajavi then raised the Iranian people and Resistance’s demands from the international community.

“Our demand is for the international community to end its policy of giving concessions to the Velayat-e Faqih regime. Our demand is to end the silence and inaction over the crimes of the Iranian regime in Iran and throughout the region. What we seek instead is their respect for the Iranian people’s quest for freedom.”

Mrs. Rajavi also elaborated on Tehran’s interventions in Syria and the carnage of innocent civilians and declared, “In diametric opposition to the mullahs, we and our people stand side-by-side with the courageous and honorable people of Syria. We consider their innocent children as our own and we feel their pain and suffering. We shed tears for their devastated cities. We are restless because they are homeless.”

Ms. Ingrid Betancourt, former presidential candidate and senator in Columbia, herself a hostage for a long time, devoted her speech to the spirited political prisoner Maryam Akbari Monfared. Referring to the tremendous pressure imposed on her by the clerical regime for demanding justice for her executed siblings, Ms. Betancourt said, “Maryam Akbari is very courageous to demand justice while still in the hands of the regime. She is demanding what we should have been asking for her. We should set Maryam as an example and do what she does… One day, Maryam Akbari is going to be with us, and fighting with us for justice. One day the Iranian regime leaders will pay for the crimes they have committed and they will be prosecuted.”

The next speaker was Shabnam Madadzadeh. She was a political prisoner who managed to leave Iran and join the Iranian Resistance. Ms. Madadzadeh was a third-year student of Computer Sciences at Tehran’s Teachers Training University, when she was arrested in 2009 at the age of 21 and sentenced to five years in prison for her active participation in the student movement.

She spent six years in Tehran’s Evin Prison, Gohardasht Prison in Karaj, and Varamin’s notorious Qarchak Prison for women. The clerical regime pressured her family due to her staunch resistance in prison. She lost a sister and a brother in the Iraqi Army’s attack on Camp Ashraf on April 8, 2011, at the behest of the clerical regime.

In her speech to the conference, Ms. Madadzadeh said, “We found solace in the proud resistance of the residents of Camp Ashraf. We were inspired by their perseverance and resolve even as we faced some of the most difficult times of our lives, like experiencing the execution of my dear friend, the Kurdish heroine, Shirin Alam Houli…

“To all the European countries and international institutions… The Iranian people condemn any form of relation or deals with the Iranian regime and they say that by continuing such engagements and by remaining silent about the regime’s abuses, new gallows are set up in Iran’s streets. The real price of your trade with Iran is the blood and lives of human beings. The Iranian people are convinced that the Iranian regime will be toppled by the PMOI and the NCRI.”

Judge Fatoumata Diarra was also among the speakers to the conference. Ms. Diarra was a judge of the International Criminal Court from 2003 to 2014. She briefly explained her experiences with investigations of crimes against humanity in other countries. In Iran, she said, “The crimes and massacres in Iran are considered as crimes beyond imagination. These crimes threaten peace and security of the world and they are dangerous. Obviously, the Iranian courts will not investigate the massacre. The minister of justice himself was one of the perpetrators of this crime. So it is incumbent on the international community to undertake the initiative and obtain justice for this crime against humanity.”

Judge Diarra reiterated, “If these crimes in Iran are not punished, it would be an eternal shame for the international community.”

In another part of the conference, Ms. Farideh Goudarzi, another former political prisoner who has recently left Iran and joined the Iranian Resistance, addressed the audience. She is one of the witnesses of the 1988 massacre of political prisoners in Iran. Her husband, Behzad Afsahi, her sister and brother, Fariba and Parviz Goudarzi were slain the clerical regime in 1984 and 1988.

She gave birth to her son in prison and was held five and a half years in Hamedan Prison under torture.

She testified that Ibrahim Raessi, one of the members of the Death Commission in the 1988 massacre, was the prosecutor of Hamedan when she was arrested and he was present in the room where she was tortured. Raessi is one of the highest officials of the regime and one of confidants of Khamenei who has been appointed as head of the Astan-e Qods Razavi, which is one of the greatest financial empires of the clerical regime.

Ms. Goudarzi was accompanied by her 33-year-old son, Iman Afsahi, at the conference. She addressed Mrs. Rajavi and said, “I have come to join the Justice Seeking Movement seeking justice for 120,000 victims of executions in Iran, including my own brother, sister, husband and friends. I have gained energy from your call for justice to demand justice for our loved ones and bring justice to the criminal regime.”

Ms. Jelia Sane, barrister, experienced international lawyer and a member of the Bar Human Rights Committee of England and Wales, also addressed the audience. She said she was incredibly moved by the stories of the suffering of the Iranian people she heard at the conference. The 1988 massacre “is a clear example of state’s terror, of state’s butchery, of state’s savagery” and it was an attack on the very concept of being a human being. The text of the decree which ordered the massacre exists today. The highest authorities of the state were all informed of what was going on. So there needs to be accountability.

“We now have the laws in place to prosecute and there is evidently a very well-organized and tenacious community in exile, ready and willing to take up that challenge. So, I guess my message is don’t give up.”

Iran: Lack of heaters has made life difficult for girl students