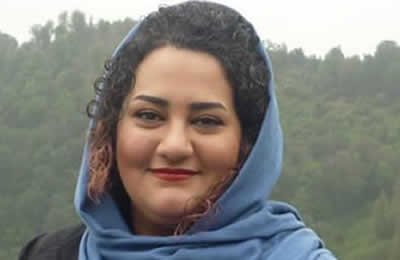 Iran: Atena’s voice cannot be silenced with oppression and injustice

Civil activist and defender of children’s rights Atena Daemi sent a letter out of prison after she was arrested and taken to Evin Prison on November 26, 2016. In this letter, Ms. Daemi protested the corrupt Iranian Judiciary that leaves real criminals, namely the officials and government affiliates who issue death sentences, embezzle money and rape children, at large but imprisons human rights activists and advocates of children and women’s rights.

In part of her letter, Ms. Daemi wrote, “They attacked our house today, November 26, 2016, while I was not raping any students, or embezzling, or issuing a death sentence for anyone. I was simply sleeping! My parents were on a journey.

On Thursday, November 24, 2016, I was contacted from the Revolutionary Court and told that they want to send me a subpoena and they needed my address… But they were lying… Instead of a subpoena, they sent three agents to arrest me. Three agents who arrest women on the streets for being mal-veiled, so that Islam would not be jeopardized, invaded my privacy and watched me while I was not veiled, so that I would not escape!

According to the law, they must have sent me a subpoena and wait at least five days for me to report in to the prison. Even if I did not go, prison agents or agents of the Directorate of Implementation of Sentence must come to arrest me, the revolutionary guards from the Sarallah Corps.

We opened the door and asked to see their written warrant, they did not show any… A woman I’m ashamed of calling a woman, started beating me and when my younger sister intervened she pounded her in the chest…

Then, they blindfolded and handcuffed me and took me to the Evin. On the way, they were constantly threatening me that they would file spurious charges against me. They said, “We will cook you such a soup (a Persian proverb) that you would forget thinking about coming out of prison!”

Ms. Daemi concluded her letter by addressing the security agent, “Be aware that you cannot suffocate Atena’s voice by such oppressive and unfair treatment. You should not tire yourself. And do not forget: ‘Our secret is dying on our feet!’ (A poem from Mexican patriot, Zapata, meaning that we refuse to surrender) Atena in an individual, but thousands of Atena’s are there outside the prison that are going to be the voice of innocent political prisoners…”