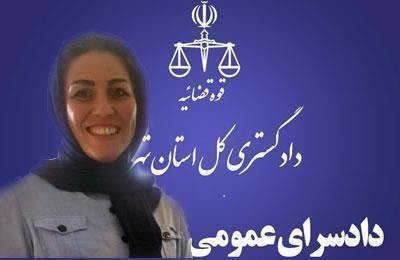 In an open letter smuggled out of prison 12 days ago, political prisoner Maryam Akbari Monfared blasted deputy Prosecutor of Tehran for harassing her daughter when she had referred to the office to receive a permit to visit her mother.

In a daring letter, Ms. Akbari explains, “It was the 19th of November 2016, today… After more than a month, I had a visit with my daughter, Zahra. She said, ‘Mom, if you don’t miss me and are able to endure it, I can do the same. I don’t like to face those people and hear their obscenities.’ I asked her, ‘Why? What’s happened, love?’ She said, ‘On Monday, when I had gone to get a visitation permit from the office of the Prosecutor, Mr. Hajiloo was very mad. His behavior was really bad and said, ‘What are these lies that your parents make up?’ ”

Upon return to her cell, Ms. Akbari asked to see Mr. Hajiloo but received this message: “This family’s tradition is lying.”

Responding to him, Ms. Akbari wrote, “Liar is your regime as it has resorted to Islam for the past 33 years to impose restrictions on people and commit crimes unprecedented in any other regime. For thirty some years, you have justified your actions by various forms of false labeling of every party, group and organization.

“My family’s tradition is clear, fighting for justice and against every hostility… My family has not killed anyone, nor has it embezzled or stolen from others, nor has it eulogized anyone…

“You do not dare to face me, so you challenge my daughter.

“For me, all of whose family have drenched in blood, there is no reason for lying. Lying is what you do. You are the ones who resort to any lie and oppression to protect your power.”