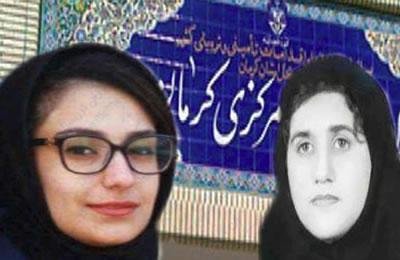 Intelligence agents raided the cell where Afsaneh Bayazidi and Hajar Piri are detained in the Central Prison of Kerman and confiscated some of their personal belongings.

According to an informed source from inside Kerman’s prison, Hajar Piri defied security agents’ obscenities and foul language by chanting, “death to the dictator”, and was subsequently transferred to solitary confinement.

Hajar Piri, 33, has been imprisoned since November 2007 without enjoying any leave. She is sentenced to 17 years in prison.

Afsaneh Bayazidi was sentenced to four years in prison in September 2016, and banished to Kerman’s Central Prison.

The two prisoners are accused of support for and membership in opposition Kurdish parties but are detained with dangerous and common criminals charged with drug trafficking.