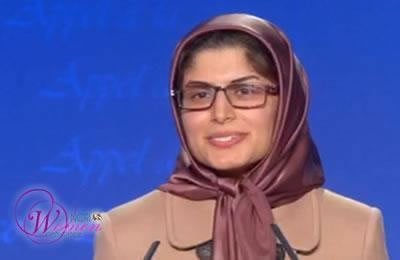 Following are excerpts from a speech by former political prisoner, Shabnam Madadzadeh, delivered on November 26, 2016, at the “Call for Justice” conference in Paris, in the presence of the Iranian Resistance’s President-elect Maryam Rajavi:

My name is Shabnam Madadzadeh. I left Iran a few months ago.

I was 21 years old and third-year student of Computer Sciences at Tehran’s Teachers’ Training University, when my studies were cut short and my brother (Farzad) and I were arrested by the Iranian regime’s intelligence agents and taken to the notorious Evin prison.

I spent three months in solitary confinement under some of the most brutal forms of psychological and physical torture at Evin’s Ward 209, the worst of which was when they tortured my brother, Farzad, in front of me.

Later, I was sentenced to five years in prison and banished to the dreadful Gohardasht prison in Karaj. I spent time in Evin, Gohardasht, and the horrid Qarchak prison in Varamin. A number of times, lasting a total of eight months, I was not permitted any visits or phone calls.

But, we found solace in the proud resistance of the residents of Camp Ashraf. We were inspired by their perseverance and resolve even as we faced some of the most difficult times of our lives, such as the execution of my dear friend and Kurdish heroine, Shirin Alam Houli.

My story began with two phrases.

These phrases were initially written on the first page of my high school and university books: “we can” and “we must.”

Every year, I wrote the phrases “we can and we must” more eligibly and more beautifully in my books.

These phrases were a great inspiration to me. They turned into courage and a refusal to surrender when I stared in the eyes of the security agents on the campus.

They turned into courage when I defended with all my power the last bastion of freedom, shoulder-to-shoulder with my classmates. These words gave me the power to speak about freedom and the right to live.

They enabled and empowered me during the horrifying attacks of security forces against our university protests and gatherings.

These words took over my soul, giving me the power of faith and confidence. They became the secret to my perseverance in solitary confinement.

“We can and we must” – these were the source of my strength when confronted with the howls of my violent interrogators.

They gave me conviction and faith as I sat down on the interrogation chair, surrounded by five or six guards who threatened me with execution and torture.

Each day of my five-year prison term, these were the words that showed me the promise of light and the coming of liberty.

When the walls seemed taller than ever and barbed wires surrounded me, these two phrases, “we can” and “we must”, were like wings that helped me fly.

Yes, Mrs. Rajavi, I found the strength to take wings and fly thanks to your empowering words: “we can and we must.”

And, now, I am here still relying on your presence and leadership, which is the concrete manifestation of the words “we can and we must.” Like a drop of dew* coming from the ocean of your eyes that glow with conviction and certainty, I have now joined the roaring sea of the Mojahedin so that I can fly even higher.

I have come from the oppressed but rebellious streets of Iran which are packed with execution cranes. I carry the huge burden our people’s suffering, especially the agony of women and girls of our homeland;

I have come to you with baskets of flowers, greetings and hope offered by the suppressed people of Iran.

I have come to you from the ranks of activists and unrelenting university students, who have sent you loads of messages.

I have brought you numerous messages from the innocent women and girls languishing at Evin, Gohardasht and Qarchak prisons. The innocent girls, whom you said, are like beautiful flowers that fade without having the chance to blossom.

I have seen hundreds and hundreds of Reyhanehs.** I have come here to tell you their stories of suffering and the injustices they have faced.

They told me they had nowhere to stay; they told me of the times when they were tortured, when they were held in illegal detention centers where they were raped by torturers. For years, these women and girls have spent their lives under abysmal circumstances, with their death sentences hanging over their heads. They are experiencing a gradual death in the regime’s torture chambers.

These are the women of my country, who have had the noose pulled around their necks for a long time…

I spoke to girls that had been arrested on petty charges, but were dragged into a world of corruption, death and drugs created by the mullahs.

I talked to a 27-year-old girl who had been arrested at the age of 17 on the so-called charge of having “illegitimate relations.” 10 years later, however, she had turned into an addict and committed murder.

I have brought all this pain to you because you are the only answer to all of them.

I have kept the suffering of all those years, all the pain, the tears and the anguish on my shoulders so that I can always feel the gravity of my responsibility, to continue my struggle in every moment of my life, and to ultimately take you to our land of the Lion and Sun.

Today, I stand in front of you to echo the voices of those who seek justice and human rights, the voices of activists and resistant political prisoners in Iran.

I echo the voices of my Christian and Bahaii compatriots who continue to be imprisoned simply because of their faith;

I am the voice of resilient women in prisons; the voice of my dear sister and my heroine, Maryam Akbari Monfared, an innocent mother of three who has spent more than seven years in prison.

When they arrested her, her daughter Sara was only four. But, even in the darkest and most difficult days, Maryam refused to surrender.

During the seven years of her imprisonment, her heart ached and I know is still aching to be with her children. She could be a mother to her kids for only 30 minutes a week during their visits, a time which had to be divided among three kids. But her smile never disappeared and she was famous for her radiant smiles.

Since the first day of her arrest up till now, she has consistently stood up to the regime’s guards and interrogators, seeking justice for the killings of her sister and brothers.

When she grew restless and her heart was aching to hug her youngest daughter, Sara, or to talk or console her teenage daughters, Pegah and Zahra, she used to tell me: Now I can understand the pain of my sister Roqieh*** who was separated from her toddler daughter in 1988 but she still stood firm and defended her cause.

She used to tell me that she believes in one thing and that is the innocence, honesty and purity of all the martyrs of the 1980s, and that the PMOI/MEK is the only light shining in a world full of injustice. She used to say that this is the only reason I am still resisting.

I want to tell my friend, Maryam, from this podium that as I told her during our last conversation at the gate of the women’s ward of Evin, I promise to be always on your side and to echo your voice as you seek justice. I promise to convey her voice to the world. I swear to all our sweet and bitter moments in prison, to be with the Justice Seeking Movement which is growing and expanding, so that we can bring the brutal mullahs to justice for massacring thousands of innocent people.

To all the European countries and international institutions, I say that you must listen to the Iranian people, to the grieving mothers of the martyrs, to the families of the victims of the 1988 massacre, and to the political prisoners in Iran.

The Iranian people have been through a lot of suffering and suppression at the hands of the mullahs. They do not care about any of the regime’s factions. For them, the color of this regime is red from the blood of thousands of innocents.

The Iranian people condemn any form of relation or deals with the regime. They say that continuing such engagements and maintaining silence over the abuses in Iran will only raise new gallows in the streets.

The real price of your trade with Iran is the blood and lives of human beings.

The people of Iran, however, are convinced that the clerical regime will be toppled by the PMOI and the NCRI.

* The meaning of Shabnam is dew.

** Reyhaneh Jabbari was executed on October 25, 2014, at the age of 26 and seven years after imprisonment for defending herself against rape by an Intelligence Ministry official.

*** Roqieh Akbari Monfared was executed in 1988 in the massacre of 30,000 political prisoners.

Ingrid Betancourt : Criminal rulers of Iran will pay for their crimes