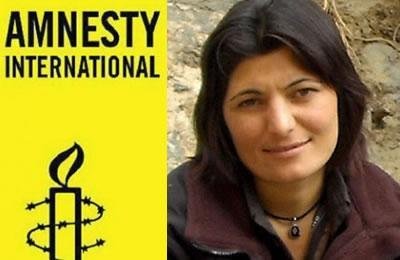 With the approach of the International Human Rights Day, Amnesty International has launched a new petition for freedom of a number of human rights activists around the world. Among them is the Kurdish Iranian woman, Zeinab Jalalian, who is denied treatment for her eyes.

In 2008, she was jailed for life for her supposed links to the military wing of a Kurdish opposition group. Her trial was grossly unfair. Not only was it over within a few minutes, but she was sentenced based on “confessions” she says she made after enduring months of torture. There was also no evidence linking her to armed activities, and she was not allowed to communicate with her lawyer.

Before her trial, she was held in a cell on her own for eight months. During this time, says Zeynab, she was flogged on the soles of her feet, and her head was repeatedly rammed against a wall, fracturing her skull and causing bleeding in the brain.

Today Zeynab suffers from a severe eye condition that urgently needs specialist surgery. Yet the authorities won’t permit it.

She needs our help. Iran’s authorities took away her freedom – we can’t let them take away her sight.