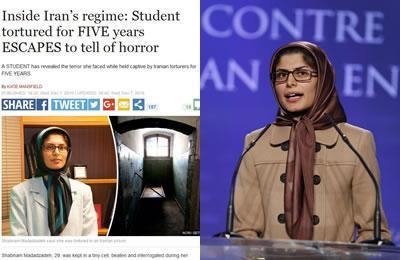 The British Express daily interviewed former Iranian political prisoner Shabnam Madadzadeh who explained the ordeal she was put through in detention in Iran. Following is the text of her interview with the Express, published on December 7, 2016:

Inside Iran’s regime: Student tortured for FIVE years ESCAPES to tell of horror

A STUDENT has revealed the terror she faced while held captive by Iranian torturers for FIVE YEARS.

Shabnam Madadzadeh, 29, was kept in a tiny cell, beaten and interrogated during her agonising years behind bars.

The activist was forced to listen from solitary confinement as female inmates were raped, before she was made to watch male guards beat and electrocute her brother Farzad as they ordered her to tell them about opposition group the People’s Mojaheidn Organisation of Iran (MEK).

Intelligence authorities charged the siblings for speaking out against Iran’s regime, with Ms Madadzadeh arrested in 2009 on her way to Tehran’s Tarbiat Moalem University where she studied computer science.

Revealing harrowing details, Ms Madadzadeh told Express.co.uk: “I arrived and spent three months in solitary confinement and there was torture, both mental and physical.

“My cell was just 2mx3m and I was alone with no connection to the world.

“My family was not allowed to contact me and they could not find out anything about me or what it was like for me in jail.”

When she was finally allowed out of solitary confinement, Ms Madadzadeh secretly sent letters from her cell to draw attention to prison brutality.

The student repeatedly refused to speak to interrogators, who would question her for eight to ten hours every day and found herself subject to increasingly violent and lengthy interrogations.

She said: “They pushed me and they hit me a lot.

“It was long interrogations – eight to 10 hours a day every day.

“They grabbed my hair and pushed my head and wanted me to say what they wanted to hear.

“They tortured my brother, even more in front of my eyes.

“They increased the pressure and even more in the interrogation they said they would kill me and threatened to execute me.

“Nobody knew where I was, I was alone and I heard the sounds of other prisoners being tortured. They would cry out and it was the most horrible sound”.

The activist claims other female prisoners were raped by guards and routinely sexually assaulted.

Other prisoners were electrocuted and put on a rack before being beaten.

The activist is now urging Western governments to stand against Iran and its President Hassan Rouhani and to back the National Council of Resistance of Iran which works alongside the MEK.

She said: “The West cannot negotiate with the regime.

“It’s the most criminal in the world. The face of the regime is not the smiling faces and shaking of hands.

“My message to European leaders is stop negotiating with the regime.

“The number of executions is increasing.”

An estimated 966 to 1,025 people were executed last year, the highest number in a decade, with 170 recorded executions in the first six months of 2016.

Speaking to the European Parliament about the horror she endured, Ms Madadzadeh, said: “During my five year imprisonment I witnessed numerous crimes of this regime particularly against Iran’s innocent women and girls and today I am here to be the voice of the voiceless, the voice of those being crushed in the clutches of this misogynist regime in face of the world’s silence and inaction.

“The message of the Iranian people to western governments, and my message today is that you must adhere to the three decades of struggle by the Iranian people to break free from the clutches of this regime and accept the true freedom fighters, the National Council of Resistance of Iran as the true representative of the Iranian people, and refrain from any type of negotiations or deals with this notorious regime, because the true price of your deals is human lives, gallows in the streets of Iran.

“This is a reality which I learned and felt in the university, in the prison and after my release in Iranian society. They have the desire and potential to bring about change in Iran.”