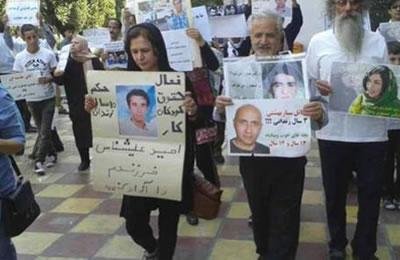 Iran: Woman speaks out against illegal arrest of her son

“We have no fear because we are rightful. What must we fear from? They think they can terrorize us. All that we are doing is protesting their oppression and their illegal actions. And we will express our protest in any form… They should not expect us to remain silent when they oppress us,” said Simin Aivaz-zadeh, whose son, Omid Alishenass, was arrested in the morning of December 10, 2016.

“As a mother, I fear nothing, when they take away my innocent son. Nothing can compel me to be silent or back down.”

Omid Alishenass was sentenced to seven years imprisonment in summer for “association and conspiring against the state” and for “insulting the leader” and was taken to Evin Prison to start serving his sentence.

Ms. Aivaz-zadeh said, “It was 9.30 in the morning when the doorbell rang. I opened the door. They said we have letter for Omid Alishenass… I did not let them in and told them to give me the letter… but they said they had come to take him… The letter was from the IRGC Sarallah Garrison.”

Ms. Aivaz-zadeh continued, “For demanding justice during those 17 months (of Omid’s imprisonment) for the illegal detention of my son, I was arrested and detained 9 days. They sentenced me to flogging but ultimately they had to release Omid. My son is innocent and I will continue my efforts (to set him free).”

Iran: Eight women arrested in a party in Mashhad