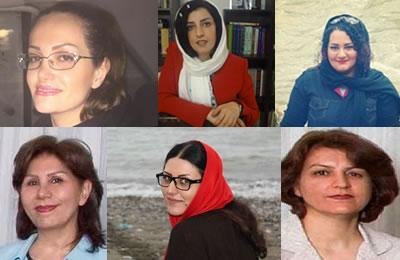 On the International Human Rights Day, the women imprisoned in the women’s ward of the Evin Prison had a small ceremony honoring the day. Each of the participants made a short speech briefly explaining her own experience with human rights.

Atena Daemi said, “We must recognize the fact that we are the ones who must take steps to uphold human rights in our society. We must know our rights and we must protest whenever our rights are violated.”

Bahaii prisoner Mahvash Shahriari pointed out that a multi-facetted movement is needed to realize human rights in any society. These efforts must be included in the works of all writers in a society to attract more attention to the issue.

Fahimeh Aarafi who has been detained for protesting the overdue incarceration of prisoner of conscience Mohammad Ali Taheri, declared her continued fear over his health.

Sotoudeh Fazeli, 65, a teacher with 30 years of experience of teaching in Tehran’s schools, protested violation of her rights as a mother whose only crime was attempting to visit her children.

Kurdish prisoner Mahin Izadi talked about the deplorable conditions of women in the Iranian Kurdistan.

Bahaii prisoner, Fariba Kamalabadi, expressed her belief that the only guarantee for upholding human rights is adherence to moral principles.

Maryam Akbari Monfared used the opportunity to pay tribute to the champion of human rights in Iran, Dr. Kazem Rajavi, who endeavored to free political prisoners under the Shah’s regime. Due to his efforts, the execution of Massoud Rajavi who presently leads the Iranian Resistance movement, was prevented.

Golrokh Iraee noted the condition of her husband, Arash Sadeghi, who has been on hunger strike for some 40 days and said: To uphold human rights, people must be educated about them and more importantly, we should not want human rights just for ourselves, but for everyone.

Fatemeh Mosanna pointed out that she was arrested at the age of 13 and imprisoned along with her mother only because of her relationship with political opponents of the regime; she protested violation of her rights.

In conclusion, Nargess Mohammadi said, “Suppression of civil institutions is a gross and targeted violation of human rights because it destroys human rights’ infrastructure. This is something that must be noticed by human rights activists and intellectuals.”

Daniela Aiuto: Do not ignore women's rights in Iran