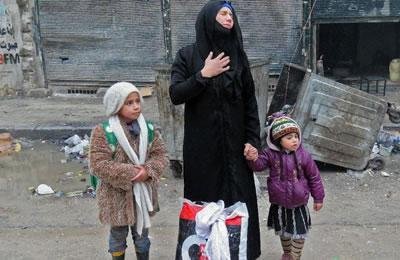 Civilians including women and children shot on the spot in Aleppo

Pro-Syrian regime forces have been entering homes in the last remaining rebel strongholds in eastern Aleppo and killing civilians “on the spot”, the UN has said.

Rupert Colville, a UN human rights spokesman, said the reports indicated that 82 civilians had been killed across four different neighborhoods. He described what looked like a “complete meltdown of humanity” in the city. He said 11 women and 13 children were among those killed.

Relatives of Free Syrian Army rebels, including women and children, were among those executed, activist Mohammad Basbous of the Aleppo Media Center told CNN Monday.

The Syrian Observatory for Human Rights said there were corpses abandoned in the streets with residents too terrified by the shelling to bury them. “Real massacres” were taking place in the city, the war monitor said.

The UN chief, Ban Ki-moon, expressed “grave concern” over reports of atrocities against a large number of civilians, including women and children.

In a statement, Ban stressed the obligation of all parties “to protect civilians and abide by international humanitarian and human rights law. This is particularly the responsibility of the Syrian government and its allies.”

The UN humanitarian adviser on Syria, Jan Egeland, said the Syrian and Russian governments must be held responsible for any atrocities committed by militias loyal to Assad.

The ICRC said: “A deepening humanitarian catastrophe and further loss of life can be averted only if the basic rules of warfare – and of humanity – are applied.”