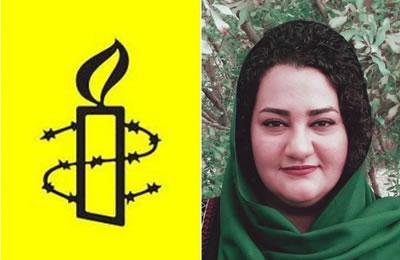 Amnesty International issued an Urgent Action on December 12, 2016, protesting the illegal and violent arrest of human rights defender and anti-death penalty campaigner Atena Daemi, and calling for her release.

The AI wrote, “Anti-death penalty campaigner and human rights defender Atena Daemi was arrested on 26 November 2016 when three Revolutionary Guard officials raided her parents’ house and took her away to Tehran’s Evin Prison to begin serving her seven-year prison sentence. In a letter leaked from prison on 1 December, Atena Daemi said that she was beaten and pepper sprayed by the officials arresting her after she insisted peacefully that they present an arrest warrant. She has said that her sister was also punched in her chest when she attempted to intervene to stop the officials. She also described how, on the way to prison, the Revolutionary Guard officials blindfolded her and repeatedly threatened her by saying that they would open new cases against her and had ‘cooked up a plan so that she gets the thought of ever getting released from prison out of her mind.'”