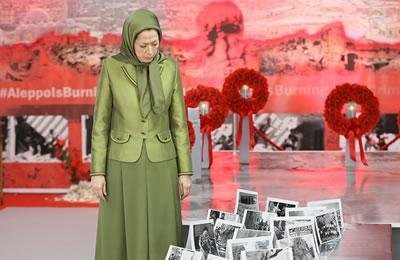 The Iranian Resistance’s President-elect Maryam Rajavi hailed the steadfast people of the besieged city of Aleppo, describing the massacre of its innocent people a war crime and a crime against humanity.

She said the mass executions by the Iranian regime’s Revolutionary Guards and their mercenary militias were underway in Aleppo, adding that inaction against the greatest crime against humanity in the 21st century is totally unacceptable and shameful.

She called on the international community to take urgent action to stop this brutal bloodbath and to prevent further massacres and killings.

Mrs. Rajavi added: “The regime in Tehran is the source of crisis in the region and killings in Syria; it has played the greatest role in the expansion and continuation of ISIS. Peace and tranquility in the region can only be achieved by evicting this regime from the region.”