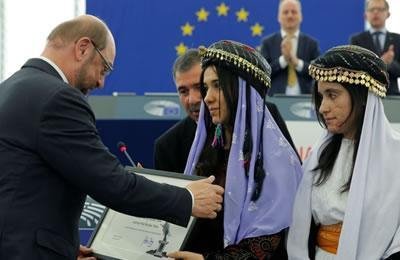 Lamiya Aji Bashar and Nadia Murad won the 2016 Sakharov Prize for Freedom of Thought in October for standing up for the persecuted Yezidi minority and victims of Islamic State sexual violence.

The Yezidi community was displaced by an Islamic State campaign of mass murder and sexual assault in Iraq in 2014. The community was singled out for persecution, as the extremist group sees them as infidels.

Aji Bashar, 18, wearing a gold-trimmed black headdress and a white veil, spoke first to members of parliament and guests who had gathered in the European Parliament for the event.

“This prize is a prize for every woman and girl who has been sexually enslaved by Daesh … and for everybody around the world who has been a victim of terrorism,” Aji Bashar told EU lawmakers, using the Arabic acronym for Islamic State.

Aji Bashar said she was 15 when Islamic State militants overran her Iraqi village of Kocho in August 2014. They killed all the men, she said, including her brother, father and other relatives, before killing the older women and trading the younger ones on the slave market.

Aji Bashar told the audience that she tried to escape each of the four times she was sold. She described how she and two friends were tortured and raped by an Iraqi doctor.

Members of parliament listened to the translation of Aji Bashar‘s speech through black headphones. Their faces reddened and some of them covered their mouths as the 18-year-old described the death of her friend, who stepped on a landmine during their final escape.

“The last thing I heard were her death screams,” Aji Bashar said.

Fighting back tears, she explained how the explosion had burned her entire body and left her blind in one eye.

Some lawmakers, their brows furrowed and faces grim, clapped to urge Aji Bashar to continue her speech.

“I urge you to promise me, to promise us, that never again … will you allow these kind of things to happen,” Aji Bashar pleaded.

“Promise that you will listen to us and see that justice will be done,” she said.

Murad, 23, wearing a gold-trimmed headdress and a light purple embroidered veil, told lawmakers that her heart was full of happiness for the EU‘s decision to stand by Yezidi women and their community in a time of tragedy.

She described how 75,000 Yezidi people had been forced to emigrate, and said those who remained in Iraq faced an uncertain future.

“Today my community has disintegrated under the weight of genocide,” Murad said. “Half a million people do not know where the future is leading them.

“Will we return to our lands?” she asked, her eyes searching the audience. “Should we emigrate?”

Murad praised Germany for offering sanctuary to 1,000 Yezidi women and offering them medical and psychological treatment.

The 50,000-euro (53,000-dollar) Sakharov Prize has been handed out since 1988. Named after Soviet dissident Andrei Sakharov, the award honors people who defend human rights and fundamental freedoms.