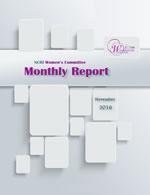 The UN General Assembly adopted a resolution on November 15, 2016, condemning violations of human rights in Iran. In Article 14, the resolution strongly urged the Iranian regime “to eliminate, in law and in practice, all forms of discrimination and other human rights violations against women and girls.”

The resolution enumerated all the areas where Iranian women’s rights need to be respected, including freedom of movement, physical and mental health, the right to work, protection against violence, equal access to justice, early and forced marriage, women’s participation in leadership and decision-making processes as well as equal access to education and the labour market.

In another remarkable development, former political prisoners Shabnam Madadzadeh and Farideh Goudarzi who have recently left Iran, took part in the “Call for Justice” conference in Paris on November 26, 2016, and testified about the drastic plight of women in Iranian prisons. Ms. Madadzadeh, 26, was 20 years old when she was arrested for her anti-government student activities. She spent six years in the infamous prisons of Evin, Gohardasht and Qarchak in Varamin. She attested that ordinary female prisoners are raped in Iranian prisons.

On the International Day for the Elimination of Violence against Women, political prisoners in the Women’s Ward of Evin Prison held a small ceremony and discussed VAW issues. Despite the violent arrests and imprisonment of a number of women in November, there were some instances where imprisoned women courageously defied prison guards and authorities. They included Atena Daemi, Maryam Akbari Monfared, Afsaneh Bayazidi and Hajar Peari.

In the meantime, the complaint filed by political prisoner Maryam Akbari Monfared against judiciary officials responsible for the 1988 massacre, received vast support and solidarity in Iran and abroad. A wide range of people from across the country declared solidarity with Ms. Akbari’s demand for justice for her siblings massacred in summer 1988 and for all massacred political prisoners. Mothers of execution victims and political prisoners in Mashhad, young journalists of Qazvin, students from various universities in Tehran, Kerman, Kurdistan, Takestan and Iranshahr, as well as physicians of Tabriz, and political prisoners of Gohardasht Prison of Karaj were among supporters of Ms. Akbari Monfared during November. Members of parliament, women’s rights activists and female jurists from the World Federation of Female Jurists from Spain, France, UK, Brazil, Angola, Italy, Argentina and Venezuela also declared support and solidarity with this courageous prisoner.

Amnesty International issued a statement on November 3, 2016, objecting denial of medical treatment to Maryam Akbari Monfared imprisoned in Evin Prison. AI noted that she is facing reprisals after filing a formal complaint that seeks an official investigation into the mass killings of political prisoners, including her siblings, in the summer of 1988.

In another incident in late November, intelligence agents raided the cell where Afsaneh Bayazidi and Hajar Peari are detained in the Central Prison of Kerman and confiscated some of their personal belongings. Hajar Peari, 33, defied security agents’ obscenities and foul language by chanting, “death to the dictator”, and was subsequently transferred to solitary confinement.

The names of four women were verified as being detained in Varamin’s notorious Qarchak Prison with undecided status under deplorable conditions. Bahareh Basseri, Parvin Solaimani, Badri E’eraj, Akram Panahi were arrested during a protest demonstration in Tehran on October 31, 2016. They have been imprisoned together with ordinary criminals, and deprived of making any phone calls.

Lavin Karimi, 26, a student of management, is imprisoned on internal exile in the Prison of Hamedan. She suffers from stomach bleeding, but prison authorities have not allowed her to be treated in a hospital. Ms. Karimi was arrested on August 15, 2015, at her father’s house in Saqqez (Iranian Kurdistan) and later sentenced to three years in prison for cooperating with Kurdish parties.

The vision of political prisoner Zeinab Jalalian is getting worse every day but prison authorities have deprived her from receiving her much needed treatment. Doctors in the prison’s dispensary say if she is not transferred to a hospital, she will suffer eye infection in winter and she will be in a greater danger of going blind.

Political prisoner Maryam Moghaddasi has been deprived of her visitation right and is held in dire conditions in Tehran’s Evin Prison. Judiciary officials have also disagreed with allowing this prisoner to go on leave. Maryam Moghaddasi was arrested in 2010 following vast protests in cities of Iranian Kurdistan to the executions of five Kurdish political prisoners. She was sentenced to nine years in prison.

Amnesty International issued a press release on November 18, 2016, citing Richard Radcliffe on deteriorating health of his wife, Nazanin Zaghari, saying she was even contemplating suicide.

Amnesty International issued an urgent action on November 24, 2016, warning about the danger of Mansoureh Behkish being arrested. Ms. Behkish is facing trumped-up national security charges for peacefully demanding justice concerning the mass killings of political prisoners, including her siblings and brother-in-law, during the 1980s in Iran. She was denied having a lawyer during the interrogation sessions.

Sunni Baluchi prisoner, Ameneh Eassazadeh, 21, revealed that she had been held for one week in a small, dark room and starved in order to extract confessions from her. She was subsequently transferred to the ward of murderers in Bandar Abbas Prison.

Atena Daemi was re-arrested in a violent raid on her residence on November 26, 2016, and transferred to Evin Prison to start serving her 7-year sentence. The security forces did not show any written warrants for attacking Ms. Daemi’s house.

Women’s rights activist Aliyeh Motallebzadeh was also arrested and imprisoned on November 26, 2016, when she referred to the Ministry of Intelligence (MOIS) as instructed.

Eleven girls and 12 boys were arrested by the State Security Force in one of the gardens of Dezful, in the southern Province of Khuzistan. (The state-run Mehr news agency – November 4, 2016)

Seven fashion complexes including ateliers and studios were sealed up and dozens of people arrested, Sadeghi Niyaraki, the Prosecutor of Qazvin announced on Monday, November 24, 2016.

The slapping of a peddler woman in the northern Iranian city of Fouman caused a wave of outrage among the public across the country. Thursday, November 17, a destitute woman who was peddling in the street to earn her living, was attacked by a municipality agent. After removing her stuff, the municipality agent engaged in a verbal confrontation with the defiant woman and beat her in the head.

The young women and female athletes who participated in basketball competitions in Turkmenistan and won in one of the fields, were threatened to be summoned by the Iranian Ministry of Sports and Youths and dealt with fearing their participation in the games without wearing the veil. (The state-run Fars news agency – November 21, 2016)

Nasser Pour Alifard, President of the Body Building Federation, declared on November 14, 2016, that women are not allowed to participate in body-building tournaments, “due to some religious concerns.”

The executive director of Esteghlal Football Club announced on November 23, that its women’s team has been dissolved. Reza Eftekhari said the reason was the club’s financial problems.

The Prosecutor of Kerman announced that security forces had impounded over 300 cars due to their drivers’ breach of law, including dropping their veils. The cars are considered as tools for committing crime.

In a meeting held on November 14, 2016, at the school of social sciences at Tehran University it was revealed that women who sleep in the streets sell their small children for as low as 60,000 toumans (approx. $20) in (south) Tehran’s Shoush Square.

A young Bahaii woman was expelled from university after 40 days for refusing to renounce her faith. Kamand Agahi, a student of psychology in Isfahan, was expelled after she was identified as a Bahaii.

Some 200 Literacy Movement teachers from across the country took part in a major protest outside the parliament in Tehran on November 1, 2016, demanding determination of their employment status as Hassan Rouhani was addressing the parliament.

A group of preschool teachers and teachers of the literacy movement gathered outside the Department of Education in Mazandaran Province (northern Iran). They protested the government’s failure to implement the employment law and demanded a response to their concerns.

A group of girl students staged a protest gathering on November 22, 2016, at Tehran University’s Chamran dormitory and demanded lifting of the restrictions imposed on their movement in and out of the dormitory as well as the requirement of wearing the veil inside the dormitory. This followed two days of earlier protests on November 7 and 8.

Over 5,000 workers, including a large number of women, staged a protest gathering in front of the parliament on November 19, 2016. They protested a legislation proposed to change the labor law and merge the Social Security Medical Fund into the Health Plan.

A group of nurses and nursing students sent a letter on November 20, 2016, to the Minister of Health demanding full implementation of the law on nurses’ tariffs, fair payment of nurses’ salaries, and revision and reform of the bylaws on professional qualification of nurses.

Supporters and students of prisoner of conscience Mohammad Ali Taheri staged numerous protests throughout the month of November, in Tehran and other cities, demanding his release.

Their gathering outside the parliament on November 21, 2016, was brutally attacked by security forces and plainclothes agents. At least 30 women were among those arrested and taken away.

In another protest on November 26, 2016, outside the Ministry of Interior in Tehran, security forces attacked more than 100 women and human rights activists. They badly beat the protesters and arrested a number of them.

Iran: Unemployment of disabled women is twice as much as men's